This week was known as the "central bank super week," as many central banks were scheduled to announce their interest rate decisions. The market expected the Bank of England to raise interest rates by 75 or 50 basis points. Although the August UK consumer price index (CPI) fell to 9.9%, which was lower than the expected 10.2%, the BoE could not relax after the announcement of the US Federal Reserve’s 75 basis points interest rate hike decision. This is because the Bank of England had to keep up with the Fed to protect the British pound from falling further against the US dollar. Therefore, the market’s focus this week was the multiple interest rate announcements from leading central banks.

First, investors are not optimistic about the UK’s inflation trends. Not only are economists predicting that the annual inflation rate in the UK will be as high as 15% in 2023, but several investment banks predict that UK inflation could reach much higher levels. A key factor behind the record-high British inflation is the surge in natural gas prices due to the ongoing energy crisis in Europe. Furthermore, the market believes that the interest rate hikes implemented in the UK are not as large as they should be, given the record-high inflation figures. Again, the BoE’s rate hikes are below the Fed's, which could keep GBP/USD under pressure.

In the past month, the pound’s general trend has been downward, but there were signs of a rebound before it resumed its downward trend. Weak economic growth in the UK weighed on the pound’s performance, with recession fears looming over the country, especially as second-quarter GDP contracted by 0.1%. The UK’s manufacturing output and new orders fell over two years. Against the backdrop of the lowest rate hikes, the Bank of England is finding it difficult to raise interest rates aggressively due to the high risk of a recession. 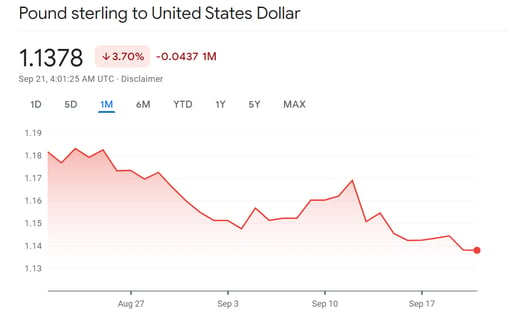 From a fundamental point of view, in addition to the Bank of England's interest rate decision, the new British government is expected to announce a mini-budget this Friday to help people cope with the cost of living crisis. However, not many are hopeful at present since it is estimated that the mini budget cannot make up for the negative impact that the interest rate decision may have on the pound.