The pound sterling has staged a recent rebound against US strength and Monday will bring the latest three-month GDP figures for the economy. Traders are expecting growth of 0.1% after the previous figure came in at -0.1%.

GBPUSD on the 4H chart highlights the potential for a move back to the bottom of the range if the numbers disappoint. 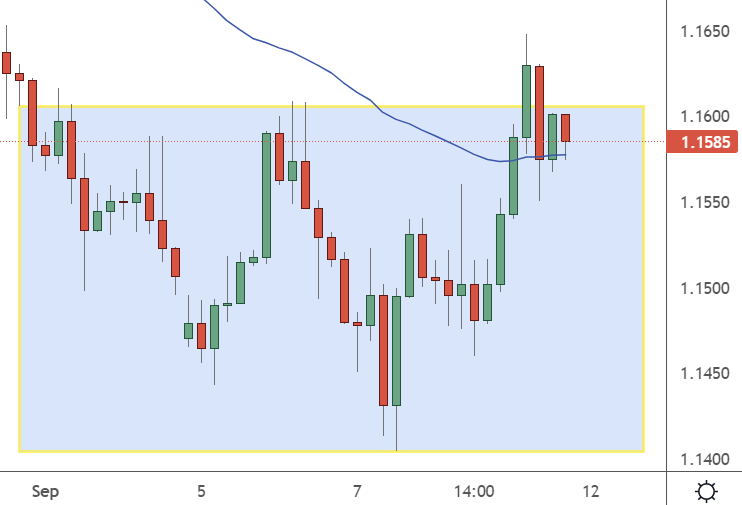 The UK is also looking at a public holiday for the funeral of Queen Elizabeth II on September 19, and that will affect commerce.

The government dismissed City of London speculation that new Prime Minister Liz Truss could interfere with the Bank of England’s policy moves as the pound slumped to its lowest levels since 1985.

"We do not expect PM Truss to remove Governor Bailey from his post, but his term could be reduced to four years from the current eight-year appointment," US investment bank Goldman Sachs said.

"It is hard to avoid the conclusion that a UK sovereign risk premium has been built into the pound," added analysts at Dutch bank ING. "That is presumably in doubt about at what price investors would be prepared to fund future UK borrowing plans."

Borrowing is needed to cushion families and businesses from the surge in energy prices that has added to fears over the UK economy. The BoE’s Governor said that a recession was inevitable for the country and that was a setback from last year’s growth.

"The person who is going to put this economy into recession is Vladimir Putin, not the MPC Monetary Policy Committee," Bailey said. "By far the largest contribution to this inflation shock is the war. That’s not something that is, I’m afraid, within the remit of monetary policy. "

He added that the government’s comments could help to boost the pound. "I do very much welcome the fact that there will be, as I understand it, announcements this week, because I think that will help to, in a sense, frame policy, and that’s important."

It’s a very busy week for the GBP v USD pair because British employment is released on Tuesday before US inflation later in the day. British inflation then follows on Wednesday. If the numbers are positive, that should add volatility to the pair and possibly breathe new life into the pound. Some further negativity would target the lows in GBPUSD again.