How to Trade JP Morgan on Earnings

Earnings season has arrived for the US investment banks, with many big names releasing on Friday.

JP Morgan releases its Q4 2022 numbers ahead of the weekend, stirring up market curiosity on what to expect and how to trade. 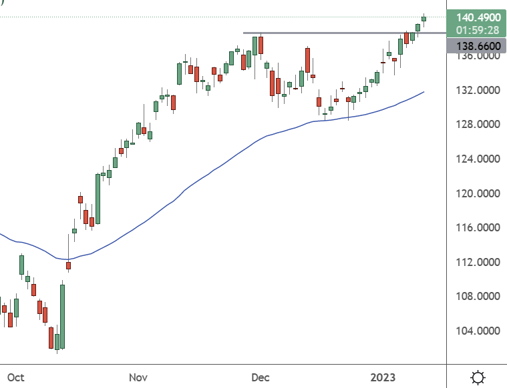 JP Morgan has been on a solid rebound since October, but the bank stalled with the Dow Jones in December. Another bounce has created a transparent support and resistance level at $138.66. If the earnings disappoint, there may be further downside to follow with the first target at $128.

JPMorgan has been able to navigate the tough headwinds, with third-quarter results showing revenue growing by 10% year over year. The bank has been able to capitalise on higher interest rates, leading to $17.5 billion of net interest income. With strong Q4 guidance of $19 billion, the bank is predicting further strength. Analysts have an average price target of $143 for this stock.

For the three months to the end of December, analysts expect the New York-based bank to earn $3.12 per share on revenues of $34.3 billion. This is compared to the previous year, when earnings came in at $3.33 per share on revenues of $30.35 billion. For the full year, earnings are expected to drop 24% year over year to $11.66 per share, while full-year revenue of $130.46 billion would mark a 4.1% increase for the year.

The Q3 earnings were boosted by higher interest rates, with solid revenue coming in at $32.7 billion, which beat estimates by $1 billion. Revenues were 14% higher, while expenses rose just 11%. Consumer profits were higher, but the bank suffered in the Investment Banking arm due to market volatility, with revenues falling 43% to $1.7 billion.

Market volatility explains the struggles in the investment banking industry, and companies are retrenching into a cost-saving mode rather than making acquisitions. Overall, the bank's four key segments showed a slight improvement.

The market will first assess the US economy's inflation report on Thursday, which will have a bearing on the path ahead for JPM following this latest earnings report.