How to Trade GBPCAD with Inflation Report

The exchange rate will see inflation readings for the United Kingdom, followed by Canadian inflation figures. The daily chart on the GBPCAD below has a breakout from the 1.5880 level with stronger resistance at the 1.6000 price level. 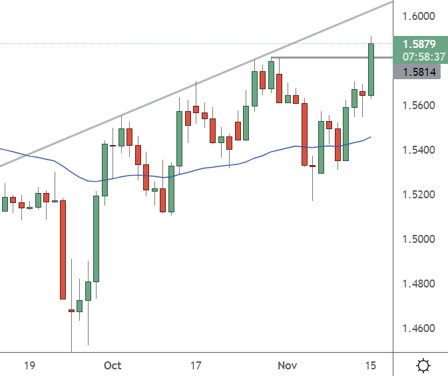 The trend is higher, and traders can look for adverse data on the pound sterling that could lead to a reversal and a sell signal.

Inflation in the UK economy is expected to jump to 10.7% yearly from last month’s 10.1%. That is a hurdle rate for the economy and may favour the pound.

Later in the day, we will see the release of Canadian inflation, with expectations for inflation in October to stay rooted at 6.9%.

However, some economists warn that Canada’s annual inflation rate will probably increase.

BMO is expecting to see annual inflation at 7.2%. At the same time, RBC also expects inflation to have risen slightly, with a prediction of 7%. Analysts say that higher fuel and food prices will be the driver.

“As long as energy prices don’t persistently push higher, the expectation is inflation will back off,” said Benjamin Reitzes, BMO’s macro-strategist.

Bank of Canada governor Tiff Macklem still sees inflation as being too high.

“There is scope to cool the labour market without causing the kind of unemployment surge we have typically experienced in a recession. Suggested unemployment rate will rise somewhat if the job vacancy returns to more normal levels, but it would not be high unemployment by historical standards. Slightly negative growth is possible over the next few quarters. That’s not a severe recession, but it is a significant slowing of the economy. Right now we need the economy to slow down.”

To reach the 2% inflation target, we need to rebalance the labour market, which will be a difficult adjustment,” he added.

Canada’s job market was surprisingly strong in October, with 108,000 jobs created, far more than the 10,000 financial analysts had expected.

The United Kingdom is going the other way as Tuesday’s jobs release reported a loss of -52k jobs, with the unemployment rate rising by 0.1%.

Thursday could also bring volatility for the GBPCAD as the UK government announces a new mini-budget with tax rises and cuts to public spending, signalling a return to austerity.