Friday’s economic data will include a final reading of German inflation for October, but the key number will be the latest 3-month UK GDP figures.

The British economy is expected to be in recession with a -0.5% figure and the actual result will determine how the exchange rate moves. 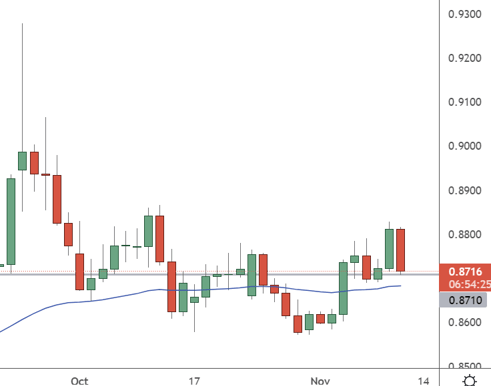 The daily EURGBP chart is hinting of further lows for the pair and that could see strength for the British pound. A better-than-expected GDP growth loss for the three months to the end of September could be the catalyst for that. A smaller-than-expected final reading for German October inflation would also provide the spark.

Estate agents in the United Kingdom have reported an expected slowdown in UK house prices in October, which ended a run of 28 months of rising prices.

CNBC was bearish on the longer-term prospects for the UK currency, saying a historically weaker pound on a medium-to-long term basis has a variety of impacts on the UK with the most important being on imports, which are more expensive, while exports should be more competitive.

“The problem is that the UK is very import dependent, almost two-thirds of food is imported, so a ten percent decline in the real effective exchange rate really translates quickly into higher food prices,” said Mark Blyth, professor of economics at Brown University.

“The UK is a low-wage economy. That will hurt.”

This dynamic was seen in the latest inflation figures where the UK has seen a 12% annual rise in food prices. Higher inflation has also meant that wages have slowed for the British economy this year. The Bank of England has raised interest rates from 0.25% this year to its current 3% level In order to dampen inflation.

However, the BoE Chief Economist said last week that interest rates would have to rise further in order to keep inflation at bay. That is not good news for the economy, which is heading for a two-year downturn according to the central bank.

German inflation is set to confirm that the reading rose from 10% to 10.4% in the recent period and a deviation could affect the euro currency.

Traders should have some volatility to work with in the UK GDP figures and should look to the downside with a weak daily close in the EURGBP.