AUDUSD has potential for volatility after the release of US retail sales data.

Traders will now wait for the Australian employment figures, which are scheduled to be released ahead of the Asian session. 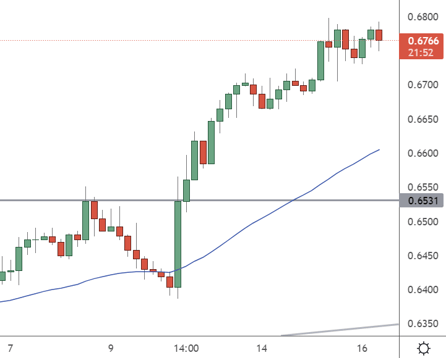 The Aussie dollar has been on a solid uptrend but has stalled at the 0.6770 level. The employment figures will determine whether the pair can push higher or retreat toward the 0.6600 support level.

Retail sales for the United States economy rebounded more than expected in October and will boost the greenback. The US Department of Commerce said retail sales volumes expanded at a monthly pace of 1.3% to reach $694.5bn. That was a strong performance after last month’s growth was flat. Excluding motor vehicles and parts, retail sales rose by 1.3% and by a whole percentage point when fuel station sales were excluded.

Employment figures for the Australian economy are forecast to show a gain of 15k jobs, compared to a small 0.9k growth in the previous month. The job market’s weakness is expected to show a tick higher in unemployment to 3.6% from 3.5%.

Inflation is still lingering in Australia with a rise in wages, which climbed 1% in the three months through September from the previous quarter. That was the fastest pace since early 2012 and marked an annual gain of 3.1%, government data showed on Wednesday.

Both of those readings were higher than estimates. They looked to have secured another interest rate rise in December, bringing the Reserve Bank of Australia’s benchmark rate higher by 3% over eight months.

“While we don’t think this figure will alarm the RBA, it is a large step up,” said Felicity Emmett, a senior economist at ANZ. “It’s therefore unlikely the RBA will pause in December. So, absent an exceptionally weak October employment report tomorrow, we continue to think they’ll raise the cash rate by 25 basis points.”

Traders can await the employment figures and see if the latest pause in the Aussie will lead to a correction.