GBPAUD Could Retrench Further with GDP and Consumer Data

The GBP/AUD exchange rate slumped last week as the 1.8000 level proved stubborn for the pair.

Data ahead this week can see a further recovery in the Australian dollar. 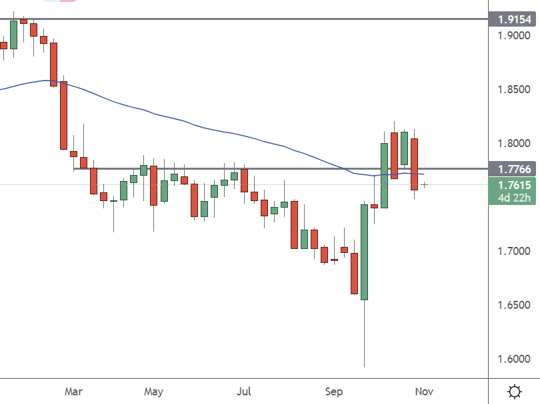 The first release will be Westpac consumer confidence data, which will be released ahead of the Tuesday session. Friday will bring the latest September GDP data for the UK economy.

In a separate report on Australian consumer behaviour, the index was lower for a fifth straight week, which may be bearish for the Westpac number.

The Reserve Bank of Australia will watch the figures closely this week, and there is also an Australian Bureau of Statistics household spending indicator on Tuesday. The weekly surveys from ANZ and Roy Morgan will both come on Tuesday as well.

Aussie consumers have to tighten their belts after an aggressive reversal in policy from the RBA, which led to aggressive rate hikes.

Friday’s GDP data from the UK economy is expected to show a further deterioration in growth to -0.5% for September, down from -0.3%. The pound sterling could suffer if the number comes in worse than expected.

The latest economic growth figures will reveal whether the UK is on the verge of a recession. The data published by the Office for National Statistics on Friday has economists widely expecting the economy to have contracted in the three months to September. If that is the case, it would put the UK on the brink of a formal recession should growth fail to recover in the year's final three months.

The new prime minister, Rishi Sunak, has an upcoming budget for the British economy and said: "We are going to deliver growth."

Mr. Sunak added: "We are going to do it sustainably, built on the foundations of strong public finances." We got a glimpse of what happens when you get that wrong.

"I care about getting borrowing under control, as it’s going to make mortgages more affordable for your readers. "I am going to fix those problems."

The budget can be a driver of the British pound, but after the previous problems with the bond market, Sunak’s budget is unlikely to rock the boat on areas such as tax cuts.

The weekly chart shows weakness at the 1.8000 level for the GBPAUD, and traders should use that for the week ahead.