The situation in Russia and Ukraine has stirred a new wave of rising prices, which has been made worse by the already high inflation in the United States. The US reported a February consumer price index (CPI) figure of 7.9 per cent year-on-year, in line with market expectations. However, the surge in gasoline prices, which are up 6.4 per cent, contributed to over half of the monthly CPI gains.

Last month, the US Labour Department said that the January CPI grew 7.5 per cent compared to 2021, its highest ever increase since February 1982. The number surprised market participants because it exceeded the upper limit of 7.2%-7.3% that most analysts were expecting.  Now it is time to get new CPI data for February, with many expecting the trend to continue. However, as the Russian-Ukrainian war continues to affect the global financial markets and Russia gradually implements countermeasures, there is significant uncertainty regarding whether US prices will peak.

US Prices May Be Ready To Peak

The Biden administration's previous focus was on curbing high domestic inflation, driven by strong domestic consumer demand and supply chain disruptions due to the pandemic’s impact.  The prices of most goods and services in the US markets have risen as the market grapples with the highest CPI increase in 40 years. Additionally, the war between Russia and Ukraine is fueling the surge of oil prices and increasing supply chain interruptions.

Economists expect inflation in the United States to peak at 8 to 9 per cent this month or next month as the Russia-Ukraine conflict, and the price of primary commodities such as oil and food keeps rising due to tough sanctions against Russia. However, it is not difficult for the markets to shift focus to concerns about the Fed's early interest rate hikes, with many expecting the Fed to increase the number of rate hikes in 2022.

The conflict between Russia and Ukraine directly impacts the prices of crude oil and agricultural products. The United States has announced the implementation of an energy import ban on Russia. Additionally, the United Kingdom has started the phased cancellation of Russian oil imports before the year ends. The sanctions against Russia allowed crude oil prices to break through the crucial $100 mark in one fell swoop. As of March 10, the United States New York WTI crude oil was trading at $106.02 per barrel, Brent crude oil was at $109.33 per barrel, after crude oil futures prices by over 30% since the Russo-Ukrainian War started. In addition, the United States announced the release of 50 million barrels of strategic oil reserves and increased the development of domestic oil and natural gas resources. The US is also pushing for clean energy sources to curb soaring energy prices. 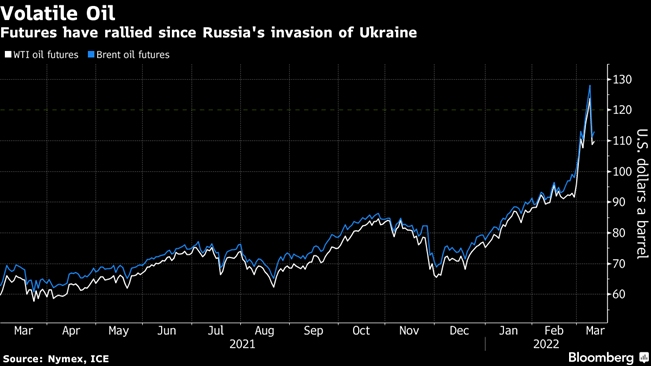 Although oil prices have risen sharply, the impact on the recovery of the US economy has been limited for the time being, as domestic consumer demand has remained strong. JPMorgan economist Peter McCrory said rising oil prices would threaten US GDP growth. However, Damo expects GDP growth to remain above the current trend this year. In addition to oil prices, food prices have also attracted market attention.

According to the US Department of Agriculture’s 2021 statistics, Russia and Ukraine account for more than a quarter of the world's wheat exports, about 20% of corn exports and 80% of sunflower oil exports. The conflict between the two countries led to a sharp rally in wheat prices. The Chicago Board of Trade’s(CBOT) most actively traded wheat futures contract soared during six consecutive trading days, once trading at $13.635 per bushel. The latest report released by the American Wheat Association shows that wheat futures prices have been in a continuous upward trend since February. Since most economists target 2 per cent inflation, it is clear that the United States has deviated sharply from this target for a while now, and the market risks are still there. For example, suppose the situation in Russia and Ukraine continues to push oil prices higher up to $150 level in future. Such a scenario would trigger higher inflation in the United States, with the CPI likely breaking above 8%. Furthermore, some market participants predict that oil prices could break through $180 a barrel later this year.  In March, some traders are betting that oil prices will soar to $200 per barrel.

If US inflation exploded higher in February, the Fed might increase its efforts to curb inflation in the future. As a result, the pace of monetary policy tightening may accelerate, and the number of interest rate hikes may increase. However, the market is concerned that as inflation continues to soar, while the Fed implements tighter monetary policies, it may dampen consumer demand. Such a scenario may expose the US economy to the risk of a recession, which could severely affect the pace of economic recovery. Therefore, the US economy and the Fed are facing a significant dilemma.