US Tech Stocks (NAS100) Are Testing the June Lows

The US Nasdaq index of technology stocks is sitting perfectly at the lows from June.

After today’s bearish activity, it will be a key crossroads and an important day on Friday. 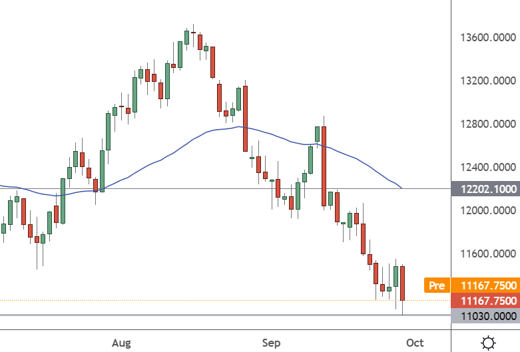 The US economy shrank by 0.6% annually from April through June, according to government figures announced Thursday. The number was unchanged from a previous second-quarter estimate and did not move markets. It was the second consecutive quarter of economic contraction, which is normally an indicator of recession, but economists feel the strong job market could save the economy from a further downturn.

Consumer spending grew at an annual rate of 2%, but that gain was offset by a drop in business inventories. Inflation is also hurting household spending and investments.

The US economy has been a mixed bag this year, with GDP slumping, but the job market has stayed strong. Employers are adding an average of 438,000 jobs a month this year, which is on pace to be the second-best for hiring behind the 2021 post-covid surge. Going back to 1940, unemployment was at 3.7%, and that is low by historical measures. There are currently around two jobs for every unemployed American.

However, the Federal Reserve’s aggressive moves on interest rates have hurt consumers, and the central bank’s chief, Jerome Powell, has said that a slowdown in house prices is likely.

"We have got to get inflation behind us," Powell said last week. “I wish there was a painless way to do that. There isn’t.”

The US economy on Friday will see the release of consumer sentiment figures and some PCE inflation data.

There are still risks for the tech sector of US stocks as analysts fear further losses on the high US dollar. More than two-thirds of analysts surveyed in a 914-strong MLIV Pulse survey think the profits of technology companies will continue to disappoint the market in 2022. Firms, including Google, are at risk of further cuts in advertising spending as the global economy continues to struggle. Streaming services, including Netflix Inc., are also facing an exodus of price-sensitive subscribers with consumers having to tighten their belts.

Apple Inc. announced that it will raise app store prices in Asia and countries that use the euro as the value of foreign currencies falls relative to the dollar. Microsoft also lowered its forecast because of the currency’s strength in June. This low in tech stocks will be a key level over the next week or two.