Is This a Low for the US Stock Market?

The US stock market saw a volatile day on Thursday but managed to vault above the 30,000 level for the close.

The US inflation picture worsened over the last month, but the Dow Jones US30 index found a rally after the data. 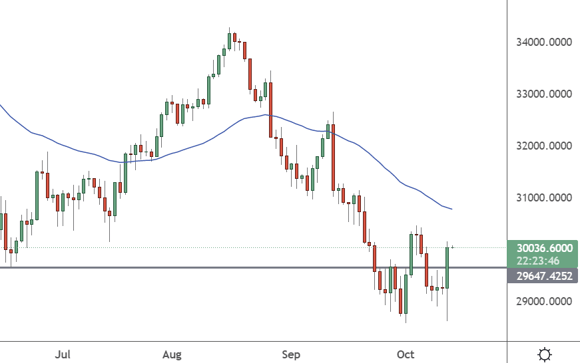 The previous lows were in June at the 29,650 level, and there is a chance of follow-through after an early October bounce.

Consumer prices rose more than forecast last month, another sign that US inflation is still ongoing. Inflation was 8.2% for the year to September, down from 8.3% in August.

Despite the drop, the figure was still higher than forecast despite aggressive rate hikes from the Federal Reserve. Interest rates are still well above the central bank's 2% target, so the Fed will have to continue raising rates at their next meetings.

"The Fed needs to react at the next meeting and keep policy tight until there is some sign that inflation is under control," said Neil Birrell, CIO at Premier Miton Investors.

"This print raises uncertainty and is bad news for the economy and consumers. The peak in interest rates will, in all probability, be higher now. It's difficult to find any positives in this for the economy or markets."

Prices have dropped back from a peak of 9.1% in June, helped by lower fuel prices. But steep increases have been seen in grocery prices and medical costs. Taking food and energy out of the equation saw inflation at 6.6% - the fastest pace since 1982.

Friday brings retail sales for the US economy, and a better-than-expected number could extend the rally. Traders will be looking at a potential peak in inflation and will look to find bargains in the market at these levels. Retail sales are expected to dip from 0.3% to 0.2% as consumers feel the pinch of higher prices.

After criticism abroad, US Treasury Secretary Janet Yellen said the US was "attentive" to global concerns, but domestic issues would guide policy.

"Our path forward begins with the jobs we have to do at home," she said. "In the United States, our top economic priority is to bring down inflation while maintaining a strong labour market."

Australian Treasurer Jim Chalmers warns US Federal Reserve chairman Jerome Powell of the recession risks from "blunt and brutal" interest rate hikes. This stems from the increasing volume of global voices on the borrowing cost squeeze.