If the Bank of Japan has marked the start of currency wars, then the EURCHF is worth watching.

The pair fell below parity in late-June and has since slumped to 0.9640. 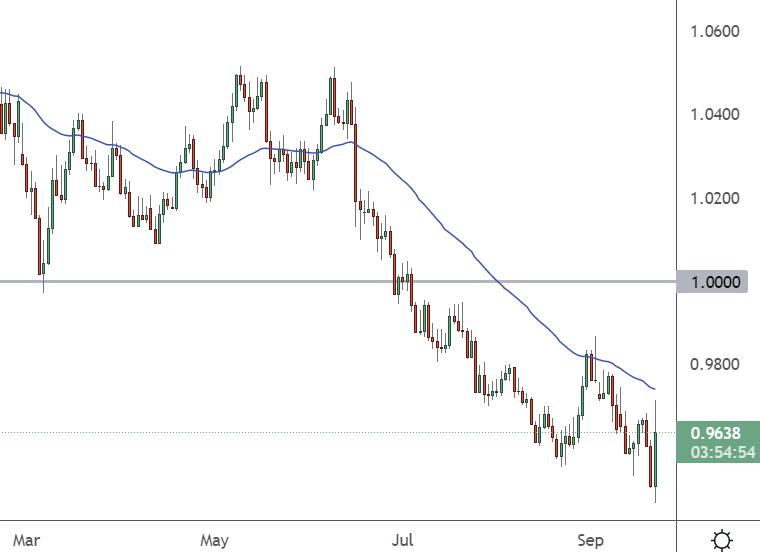 The Swiss National Bank has previously intervened in the market when it lifted the peg of the EURCHF. That led to a crash in the pair below the 1.00 level. However, the pair is trading lower than in those days, and it may be the European Central Bank that wants to avert a further slide in the euro.

The Swiss National Bank just raised interest rates to 0.75% as it brings its negative interest rate era to an end. Markets were expecting a 1% increase and the franc sold off.

Inflation in Switzerland is only 3.5% YoY, and that is much lower than in the Eurozone, where inflation is around 9%, and in the UK, it is nearer 10%. As part of central banks' plans to lower rampant inflation, they need a strong currency to lower the cost of imports such as energy.

The euro still has an advantage over the franc because the SNB move still didn’t act as aggressively as expected. The currency dropped over 2% against the single currency. That could signal a potential reprieve for the euro with a possible bottom at these levels.

The next target could be a move back towards the 1.00 level in EURCHF, but that would need further action from the ECB. Some officials from the European Central Bank have asked for more rate hikes, but they are still lagging behind the likes of the US.

If the euro were to fall further, then the bank would likely start to assess intervention, with that being verbal at first. That could add to the bounce in the single currency. Next week will see German data dominating the market with IFO Business Climate, consumer confidence, and inflation numbers released throughout the week.