On September 8, the European Central Bank’s interest rate decision that the market has been anticipating will be finally released. Currently, the forecast for the rate hike is concentrated at 50 or 75 basis points because the ECB policymakers are split on whether to aggressively raise rates or be more cautious.

Interest rate swap data showed that the probability of the ECB raising interest rates by 0.75% this week fell to about 65%, down from 80% last week. The market is also focused on whether the European economic data will be affected after the eurozone’s August CPI jumped 9.1% over the same period last year, setting a new record high. Moreover, as the autumn and winter seasons approach, energy prices will continue rising, and it is still unclear whether Europe’s inflation rate has peaked. In addition, several officials from the European Central Bank have expressed a hawkish stance, stating that the ECB needs to raise interest rates by at least 50 basis points to control inflation. Thus, the market speculates that the European Central Bank will follow the Fed’s multiple 75 basis point aggressive rate hikes, making today’s interest rate decision a significant event.

Europe, which has been caught in the middle of the conflict between Russia and Ukraine, is at greater risk of economic recession than the United States. The economic situation in the region is quite bad, especially in a country like Germany, which is highly dependent on Russian energy imports. According to estimates by international organisations, the probability of the eurozone falling into recession within six months is 50%, much higher than the 30% probability of the United States. This has also become the most significant constraint for the European Central Bank to raise interest rates and has limited the euro’s potential gains.

The above risks have caused the euro, which many hope will benefit from higher interest rates, to weaken, unlike the US dollar. The single currency extended its decline this Monday, falling to a new 20-year low against the dollar as it fell below the parity line with the dollar. It traded below $0.99 before rebounding slightly. The final annual GDP growth rate for the eurozone in the second quarter announced on Wednesday was 4.1%, slightly higher than market expectations, which helped the euro approach the parity level with the US dollar. 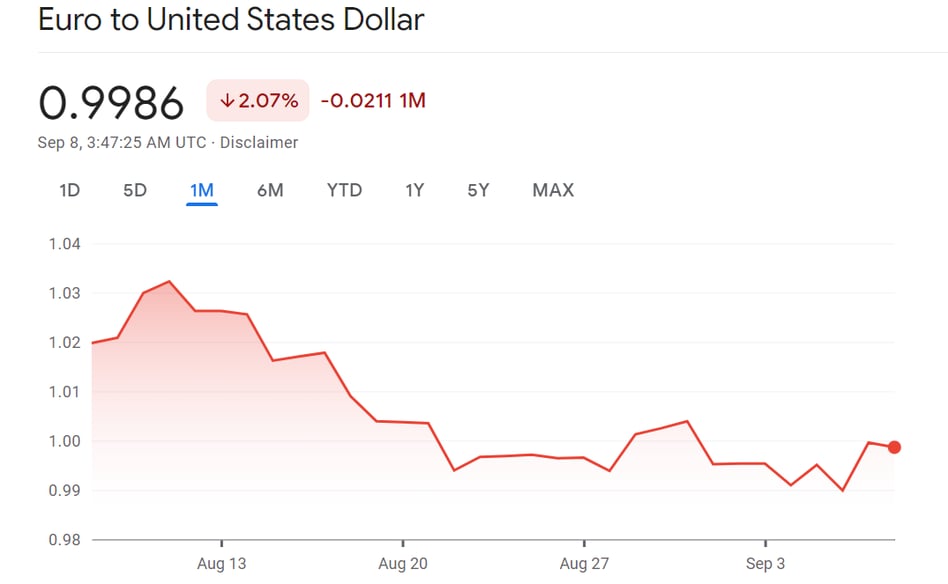 It can be seen that the downside risks for the European economy, combined with the risk of an energy supply crisis and the impact of inflation on the economy, have had a massive negative impact on the EURUSD exchange rate. If the region’s upcoming economic performance is unsatisfactory, the euro could retest the floor again, and investors should pay close attention to the data. The energy crisis is still the core factor restricting the performance of the Eurozone economy and the euro. If the energy crisis is not correctly resolved or escalated, the euro may remain at or below parity with the US dollar for a long time.

In addition, since the euro is primarily affected by the fluctuations of the US dollar’s exchange rate, Powell will make his first public speech after the Jackson Hole annual symposium on September 8. Therefore, market participants will pay attention to whether he will talk about the upcoming rate hike by the Federal Reserve later this month, focusing on his position about future rate hikes. If the European Central Bank raises interest rates more than the Fed this month, it will undoubtedly provide a temporary boost to the euro. However, if the rate hike is too aggressive, it could intensify the market’s concerns about the Eurozone economy, which may be detrimental to the euro’s performance after the rate hike.