After a recent pullback to the June highs, EURGBP found solid support at the 0.8700 level and is seeking a push higher, the recent spike high is a hard target, and the British and German economic data will determine its outcome. 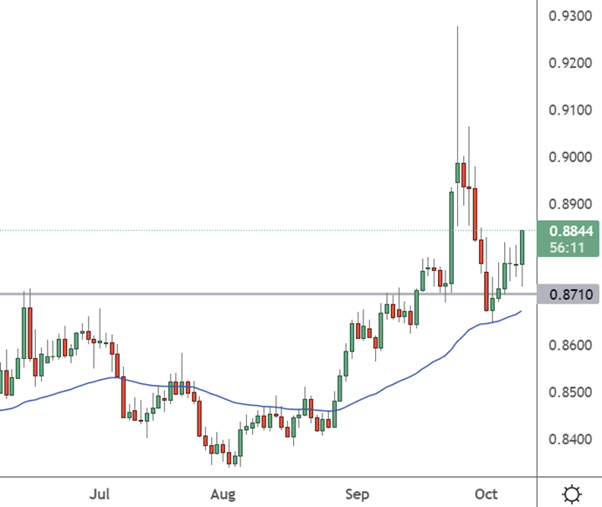 The euro is shrugging off better than employment numbers from the UK economy. Markets expected a reading of -155k for new jobs added and a more minor loss of -109k. That was also joined by a lower-than-expected unemployment rate. At 3.5%, the unemployment rate is at its lowest since the 1970s.

However, the numbers were clouded by the fact that fewer UK workers are looking for jobs. The number of people in the country not looking for work rose by 330,000 over the last three months, according to the Office for National Statistics (ONS).

Chancellor Kwasi Kwarteng said the figures “remind us that the fundamentals of the UK economy remain resilient.” The pandemic has changed the landscape of the UK economy, with nearly 1m more people not looking for work since February 2020. Persistent illness has been identified as a drag on economic inactivity.

“Growth in average total pay was six percent, and growth in regular pay was 5.4 percent among employees,” the ONS said. But the impact of inflation is causing real wages to drop, with total pay and regular pay down 2.4 percent and 2.9 percent.

The EURGBP exchange rate now looks to Wednesday and Thursday for direction. UK GDP growth figures into the end of September will lead on Wednesday and Thursday, bringing German inflation. Last month’s inflation in Germany saw a surge to 10%, and further highs would pressure the ECB to start taking bolder action on interest rates.

Sandwiched between those releases is an FOMC minutes release which often has less of an impact on the EURGBP due to it being a Britain v Europe cross.