USDCAD found resistance at 1.3835 last week with the US inflation data, which was a little softer than expected.

Wednesday is the turn of Canada’s economy to see inflation released and support in the pair is 200 pips lower at 1.3500. 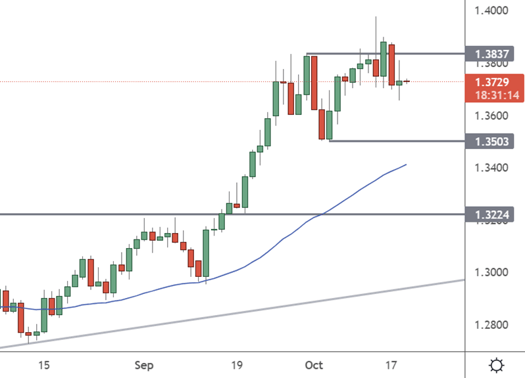 A higher number could see a rally in the Canadian dollar if traders feel that the Bank of Canada is not done with rate rises. At the last meeting, the bank lifted interest rates from 0.25% in March to 3.25%.

Some analysts believe the IMF underestimated the potential of the Canadian economy. Oxford Economics said higher interest rates and the loss of wealth from falling asset and home prices would affect developed economies.

“The IMF estimates that global growth in 2023 will be similar to 2019 – soft, but not a disaster – and that a global recession will likely be avoided. In contrast, our forecast is weaker, and we think the global economy is on the cusp of recession,” wrote Oxford Economics director of global macro research Ben May.

According to Oxford forecasts, Canada could sink further into the red than the economies of the US or UK.

“When interest rates are rising rapidly to levels not seen in a decade, things can break. In Canada’s case, the biggest risk is still the one hiding in plain sight – the massive decade-long boom in house prices and the accompanying surge in household debt.”

The decline in house prices has been slow but may not stay that way, according to Ashworth.

“The big risks are still that adverse feedback loops develop either between housing and the real economy – as a recession pushes up the unemployment rate, triggering a rise in mortgage defaults – or between housing and the financial system – with lower house prices triggering losses at mortgage lenders, leading to tighter credit conditions,” he said.

Economists at Macquarie believe that problems in housing will increase in 2023 as the impact of higher variable-rate and fixed-rate mortgages peaks.

“We expect Canada to suffer a more severe recession than the US in 2023 with the unemployment rate rising ˜5 ppts and real GDP contracting by 3%,” wrote economists David Doyle and Neil Shankar.

Despite these medium-term headwinds, the short-term will be fixed on inflation. A higher Canadian print could see the recent pullback in USDCAD gather speed. Markets are taking a hiatus from the rampant US dollar strength that has dominated all year.