The initial value of the US Markit composite PMI in August has been released, and the announced value is 45, which is lower than the previous value of 47.7. In addition, the initial values of the manufacturing and service industry PMIs were lower than expected, and the service industry PMI has fallen to 44.1 from the previous value of 47.3. As a result, the markets are worried that the US economy will slow down after the latest data is released.

Previously, the S&P 500 index had risen 17% since mid-June, driven by improved earnings performance by most companies during the second quarter earnings season. However, the US stock market has reversed course in recent days. The trend has shifted into a downturn due to the market's interest rate hike expectations and economic concerns. At present, US stocks are in a crucial position of directional adjustment. It is expected that downside risks will continue to emerge in the future while the upside momentum is limited. 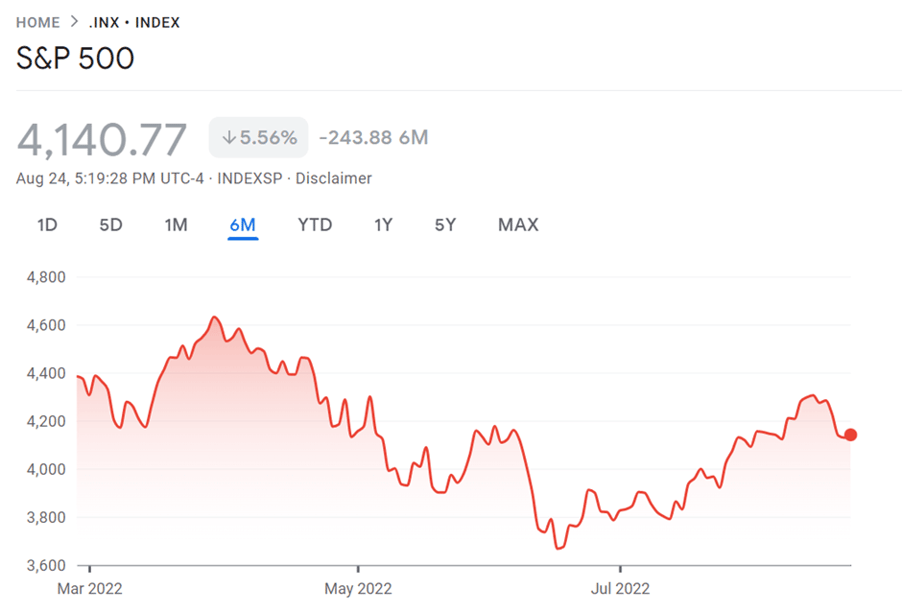 Firstly, although the US inflation data in July fell from 9.1% in June, it was still higher than 8.5%. Many US Federal Reserve officials have hinted that they will continue to raise interest rates sharply to lower inflation, which was also reflected in the July Fed monetary policy meeting minutes. However, investors and analysts are divided on whether the Fed will raise interest rates by 50 or 75 basis points. It is worth noting that the hawkish voices have increased recently, which has put downward pressure on US stocks since the financing costs for enterprises will likely continue to rise, which could drag down growth while boosting the dollar index.

Last week, investors were mainly waiting for Fed Chairman Jerome Powell's speech at the Jackson Hole central bank's annual meeting on August 26. The outside world was paying particular attention to his views on the outlook of future US monetary policy, hoping to find clues as to whether the Fed will raise interest rates in September. Attitude guidance: if the Fed maintains the current tightening policy, the next trend in US stocks may be more negative; otherwise, US stocks could rally on a dovish Fed.

On the other hand, the US economic data is not satisfactory. Recent PMI data shows that business activities are not performing well. Both the manufacturing and service industries continue to shrink. As inflation in the export market severely restricts demand, the number of new US export orders in August fell significantly. The sharp drop further exacerbated domestic concerns about a recession and may affect the Fed's upcoming decision on whether to raise interest rates. Affected by significant interest rate hikes, US new home sales fell 12.6% month-on-month in July, much more than the expected 2.5% decline, and sales volume has shrunk to the lowest level in six years.

The economic downturn has had a significant impact on the performance of the US stock market. On the evening of August 25, Beijing time, the revised value of the annualised quarterly rate of real GDP in the second quarter of the United States will be announced. The estimated value is -0.8%, and the previous value is -0.9%. If it is harmful for two consecutive quarters, it may intensify the market's forecast of a downturn in the US economy, which will be a negative factor for US stocks this week. In addition, July's annual rate of the core PCE price index in the United States will be released this Friday. The market is concerned about whether the data will decline. If the PCE is lower than expected, it will likely increase the market’s dovish view.

It can be seen that the current downward pressure on US stocks is intensifying. Hawkish interest rate hike forecasts, sluggish economic data, or inflation data that is likely to rise further may all exert pressure on the future direction of US stocks. However, as the fate of the September rate hike is not yet clear, vital information on fundamentals will continue to dominate the short-term stock market direction.