US dollar slides downwards amidst July CPI cool down

July's Consumer Price Index (CPI) came out lower. The US dollar dominance in the forex market diminished significantly yesterday with 8.5% YoY against the higher level of 9.1% witnessed in June.

The decline in the US inflation rate from the CPI report given yesterday has dashed investors' hopes of getting a more aggressive interest rate hike from the Fed during their next session in September.

The expectations of more aggressive interest rate hikes for the US dollar have been the major factor pushing investors into the currency in the hopes of getting a higher interest rate in the long term for their investments in the US dollar.

However, the slowdown in the US inflation rate has given room for the possibility of slowing down the Fed's hawkish stance towards the interest rate during their next session.

Consequently, a massive selloff for the US dollar was seen in the market yesterday. The dollar index fell below 105 yesterday for the first time in four weeks, indicating a loss of dollar strength and its general dominance over other currency pairs in the market.

The decline in dollar strength has largely favoured all forex pairs having the US dollar as their counter currency.

Hence, we find such pairs as EURUSD, GBPUSD, AUDUSD, NZDUSD, etc., benefitting from the dollar weakness and printing new highs in the market yesterday.

Commodities have benefitted from the US dollar weakness also. Hence, we find XAUUSD printing a new high yesterday above $1806, and XAGUSD followed suit, creating a new high at $20.79.

The decline in US dollar strength and the different expectations of a slow down in the pace of the interest rate hike by the Federal Reserve during their next session has further pushed investors into risk-on mode.

As US dollar dominance diminished significantly, assets pegged against the US dollar can perform again. Hence the reason for the massive inflow of capital into these assets.

Understanding the impact of the CPI on the US dollar

The Consumer Price Index (CPI) is an important economic data that measures the prices of goods and services offered to consumers. The results from the CPI are significant in measuring the country's inflation rate. The US CPI influences the US dollar so much as rising inflation causes the Fed to take drastic steps to reduce the inflation rate.

Higher readings from the CPI often increased the chances of the Fed embarking on an aggressive interest rate hike during their next session.

This often triggered a massive bullish trend for the US dollar whenever the CPI report reached higher ahead of the next Fed meeting.

However, this case was quite different last Wednesday when the US labour statistics gave the US CPI reading of 8.5%, much lower than the previous record of 9.1% in June. 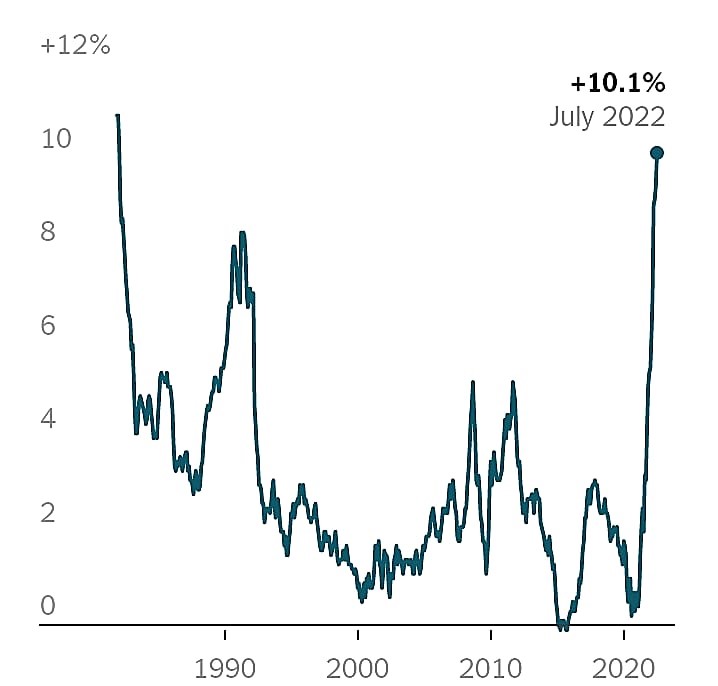 Source: US Bureau of Labour Statistics

The low reading from the CPI report yesterday discouraged investors as the chances of an aggressive interest rate hike for the US dollar during the next Fed session significantly diminished.

Hence, a massive selloff for the US dollar was witnessed on the Forex market yesterday.

A higher US CPI reading often triggers massive short-term purchases of the US dollar. This is due to expectations of an aggressive interest rate hike during the next Fed session to reduce the high inflation. The bulls will sell off immediately if the Fed fails to impress them by hiking the interest rate.

On the other hand, lower readings from the US CPI report often led to a massive short-term selloff for the US dollar over the predictions of a possible slow down in the pace of aggressive interest rate hikes by the Fed reserve during their next session. The occurrence yesterday explains the reason for the selloff of the US dollar.

Will the Fed hike the interest rate for the US dollar in September?

The question of hiking the interest rate for the US dollar during the next Fed session on September 20 -21 is currently intensely debated. This was the primary reason for the massive US dollar sell-off yesterday.

Jerome Powell hinted that the committee will first observe the economic data available to determine the pace for future interest rate hikes during their next FOMC meeting.

However, the massive reduction in the CPI reading witnessed yesterday has diminished the possibility of hiking the interest rate for the US dollar by 75 basis points again during the next Fed session in September.

Some believe the committee might as well wait to observe the CPI reading for July before embarking on any further interest rate hike. Oil prices have been the primary cause of global inflation. They have so much reduced since July, creating new lows below $90 per barrel in August. Hence, the CPI reading will be expected to slow down in August, and prices will likely stabilise by year-end.

Hong Kong’s stock index faces a crucial week or two after the price was dragged through a ...

Bank of Japan Intervenes in the Japanese Yen (¥)

The Bank of Japan sent out some threatening comments last week that signalled a potential ...

If the Bank of Japan has marked the start of currency wars, then the EURCHF is worth watch...

Following the announcement of interest rate decisions by the Federal Reserve and the Bank ...