US Dollar Rally Pauses: What Will NFP Jobs Data Bring?

The soaring US dollar has been a critical market dynamic in recent weeks and months. A greenback rally has been supported by the Federal Reserve with an aggressive hike in interest rates.

Commodities such as gold have also been kept restricted by the dynamic. 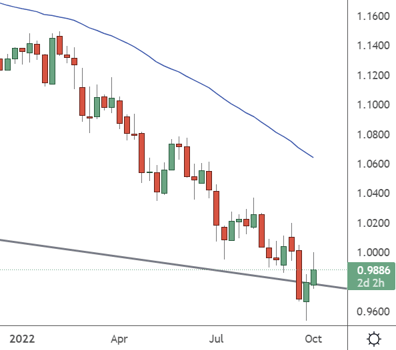 EURUSD has attempted a two-week rally as the US dollar pauses, and all eyes will turn to Non-Farm Payrolls jobs data on Friday.

The ADP employment report was released on a Tuesday ahead of the NFPs and was positive for the USD despite fears of a slowing jobs market.

The US services industry was seen slowing down modestly in September while employment surged, and prices paid by businesses for inputs fell to a 1-1/2-year low. Those figures suggested some underlying strength in the economy.

The ADP private payroll number saw an increase of 208,000 for the month. There was also a better-than-expected narrowing of the trade deficit. The economic data led to a 1% drop in the USD price and erased some recent EUR gains.

The market is currently obsessed with the potential for a FED pivot. It is pricing in the possibility that If Friday’s jobs report is wrong, the Fed will “pivot” and slow its interest rate hikes. That theory was boosted because the Reserve Bank of Australia raised rates by only 25bps when the markets expected a 50bps hike.

The EURUSD will now hinge on that Friday jobs number; if it is lower than expected, then the euro can gain. The ADP employment number suggests that the economy should have underlying strength. It will keep the dollar supported into Friday.

Markets had been considering the potential for another 75bps hike in its upcoming meeting. Still, the odds of that happening had since faded from 70% to only a 50% chance.

Even if the Federal Reserve adds another rate hike, we are likely getting closer to a slower pace of hikes by the year-end.