Traders Can Look for a Low in Gold Prices

Gold prices failed to follow the price of stock markets higher but are now staging a rally.

The $1,700 level was the key resistance for gold, and last week’s bottom has given the potential for a further rally. 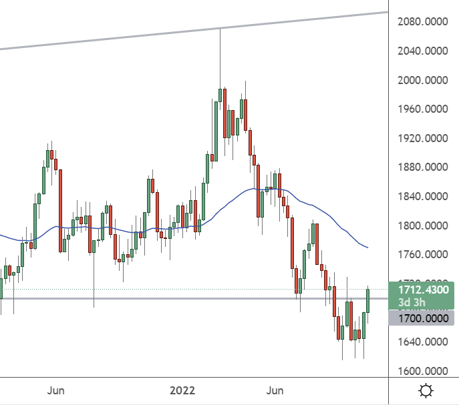 The critical event for gold will likely be Thursday’s US inflation report. If inflation ticks lower than expected, then markets will see an end to the aggressive Federal Reserve rate hikes. Gold could see a rally in the weeks ahead, with the first target being $1,800.

The latest US inflation data comes after Federal Reserve Chair Jerome Powell said that rates “have a way to go” before reaching their peak. However, tomorrow’s data is expected to dip to 8% from 8.2%.

The other issue for gold is the US midterm elections and if the results are delayed or there is contention. Gold can benefit as a political safe haven. Gold will also move depending on the spending plans that follow the election winners.

The elections could leave the government split between Democrats and Republicans, which could be positive for stock markets and risk assets. A divided government would likely bring gridlock rather than significant spending policy changes. It has been the case in history that stocks have been more robust when a Democratic White House has shared power with a split or Republican Congress.

Biden’s administration has been strict on higher taxes for the rich and an end to oil drilling, for example. Gridlock would actually be pro-business and could hurt the US dollar.

Another bullish factor for gold was that central banks bought 400 metric tonnes of gold in the September quarter, according to World Gold Council data. That’s a record inflow and typically what they’d purchase over a year.

Turkey added 95.5 tonnes to its gold holdings, while Egypt bought 44.8 tonnes. India was another big buyer with 40.5-tonnes.

Investors can now turn their attention to the data on inflation, with anything under the 8% mark year-on-year being bullish.

The US midterm elections may be delayed, but a shared government could reduce the fears over big government spending, or a Democrat win could reinforce them.