NZDUSD has found strong support at the 0.5590 level, which should be low in place.

Traders can use the RBNZ news conference tomorrow for a potential entry opportunity. 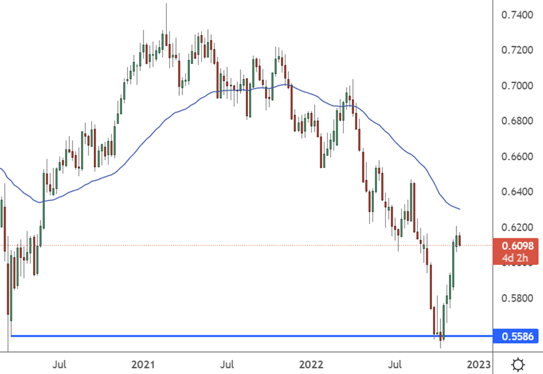 New Zealand’s central bank is expected to raise interest rates by an unprecedented 75 basis points on Tuesday as it aims to get inflation under control.

The Reserve Bank will lift its benchmark rate to 4.25% from 3.5%, according to 15 economists surveyed by Bloomberg. That would mark the most significant hike since the RBNZ introduced the OCR in 1999 and will also be the highest level since 2008.

Rising inflation and almost record-low unemployment have given the RBNZ the green light to increase rates again after five straight 50-point hikes. The move contrasts with other global central banks, which are becoming more pessimistic about growth.

“Recently published data clearly argue the Reserve Bank should present a more aggressive face,” said Stephen Toplis, head of research at the Bank of New Zealand in Wellington. “But forward indicators are arguing for a much more cautious approach. Right here and now, we plummet for 75 points, but this is a line ball call.”

Some economists suggest that the RBNZ would opt for a 50-point increase. This stems from the full impact of its recent tightening that is yet to be felt, as many households on fixed mortgage rates have yet to roll over.

The Reserve Bank of Australia moved back to quarter-point rate hikes in October, blaming the impact of higher borrowing costs on households. The US Federal Reserve hints at a slower pace for its rate hike policy after softer inflation.

The RBNZ should get inflation under control even if it risks some negative impact on the economy, said ANZ New Zealand Chief Economist Sharon Zollner.

“Don’t underestimate what’s at stake here,” she said. “The Reserve Bank’s inflation-targeting credibility is on the line in a pretty binary fashion. The risk of causing a slightly harder landing than necessary in the economy just can’t compete in terms of potential regrets.”