What are the Next Resistance Levels for Bitcoin’s Price?

Bitcoin has rallied hard with a big move higher in stock markets.

Central bank intervention was discussed at the lows, and stocks are now squeezing out short positions. 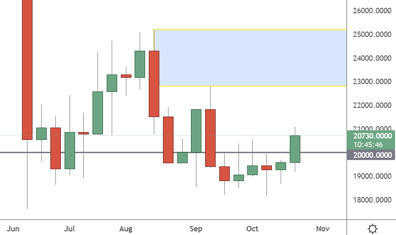 Bitcoin prices finally got above the $19,000 level, where weeks of weakness warned of further lows. The current price is $20,700 in BTC, and the world’s largest cryptocurrency by market cap is pointing higher.

The first resistance for BTC was the $22k level seen in September. We then have more considerable resistance present at the $25,000 level.

BTC is rallying with stocks after a preferred inflation indicator for the Federal Reserve suggested that the aggressive rate hike policy may soon end.

The week ahead will bring the latest Federal Reserve interest rate move, and most traders expect an increase of 75 bps in the benchmark rate. However, a minor move may spur further gains in stocks and Bitcoin due to dovish implications for the December meeting.

The significant event will be Fed Chair Jerome Powell’s press conference after the FOMC rate decision.

“What will be interesting is whether Powell tries to say the front loading is over while they are looking to reach their terminal estimate,” Bloomberg reported, meaning where rates will stop. “Powell has to say terminal risks are to the upside, but a message of the Fed downsizing will be taken by the market as being dovish.”

The central bank may indeed scale back hikes as the ISM manufacturing index is also set to be released and is forecast to ease to 50 in October. That level is the key between expansion and contraction.

The current relief rally will take the fear away from the market. However, the situation in Ukraine is still a headwind for risk markets due to the US dollar.