The EURUSD exchange rate has been finding resistance at the 1.04 level and could be ready for a reversal.

The pair was higher on Wednesday after a batch of European economic data. Traders will await the Fed's speech, and resistance for the EURUSD sits at 1.01. 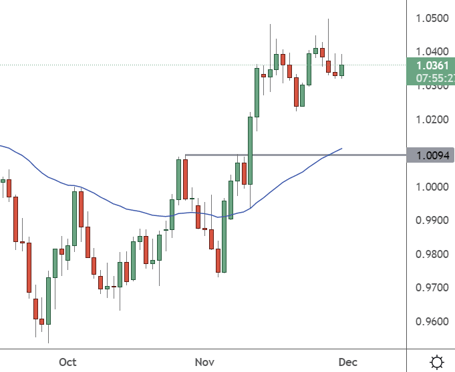 French inflation started the day off and came in at 6.2%, in line with analysts' expectations.

The economy produced very little growth in the third quarter of 2022, while household spending fell more than expected in October. Consumer spending fell by 2.8% for the month versus expectations of a 0.6% decline, driven mainly by a 7.9% fall in energy consumption due to higher prices.

In Italy, annual inflation was 11.8% in November, which was still the highest since March 1984 when it hit 11.9%, according to an estimate from ISTAT on Wednesday. The agency said its consumer price index was up 0.5% month-on-month, down sharply from 3.4% in October. "The stable growth on an annual basis of the all-item index was due to the offset of opposite dynamics," ISTAT said.

Bloomberg reported that Italy has €123.2 billion in debt from COVID-backed state support, which has increased from the previous quarter of €118 billion. Higher inflation in one of Europe's largest economies could be a worry.

In Germany, the unemployment rate was seen ticking higher to 5.6% in November, the latest data published by Destatis showed on Wednesday. Analysts had been expecting a 5.5% reading. The unemployment change was 17K in the reported period, up from 8K in August and greater than expectations of 13K.

The US economy showed a surprise increase in GDP growth, with Q3 higher at 2.9% for the year. Markets were awaiting a speech from Federal Reserve Chair Jerome Powell later. Thursday will bring PCE price data for the US and ISM manufacturing, which is expected to dip below the 50 expansion line.

In his speech on Wednesday afternoon at the Brookings Institution, Chair Powell is expected to reaffirm the message that central bank officials have been making for weeks. The Fed is on track to ease the pace of interest rate tightening, likely slowing to a 50 basis point increase next month after four straight 75 basis point hikes.

The Powell speech could drive a recovery in the US dollar after a recent decline.