EURUSD continued its descent after the FOMC rate meeting confirmed a 75 bps hike.

Fed Chair Jerome Powell signalled an end to the aggressive rate hike policy but said there was a “way to go” on rates. That put any short-term hopes for a pivot to rest. 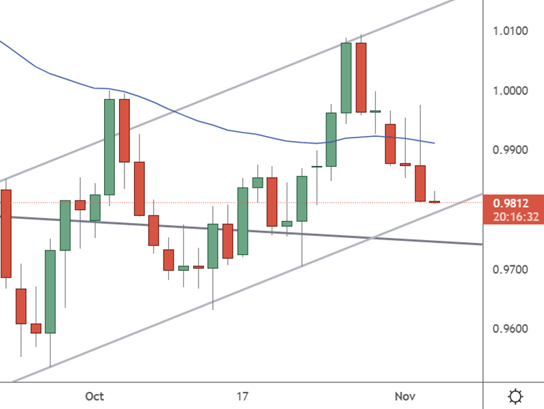 Chairman Powell said that stubborn price pressures have made it less likely that the central bank can lower inflation without creating a recession. During the press conference following the FOMC meeting, Mr Powell was also asked if the chances of a “soft landing” had narrowed.

“Has it narrowed? Yes,” Powell said. “Is it still possible? Yes. We’ve always said it would be difficult, but to the extent that rates have to go higher and stay higher for longer, it becomes harder to see the path — it’s narrowed. I would say the path has narrowed over the last year.”

The euro is suffering because of the interest rate differential caused by a prolonged European Central Bank interest rate effort.

Economic data also slowed on Wednesday for the Eurozone with slowing manufacturing sector conditions. Eurozone Manufacturing PMI for October fell from 48.4 to a 29-month low of 46.4. Despite a slump in new orders and higher operating costs, firms continued to hire, hinting at an unlikely surge in unemployment.

EURUSD can test the lower levels of a recent price channel, and the economic data and rate path favour the US dollar.