The Dow Jones Industrial (US30) index is heading for a key resistance level ahead of FOMC minutes.

The 34,280 level is the obstacle for US stocks, and a dovish Federal Reserve would boost the index. 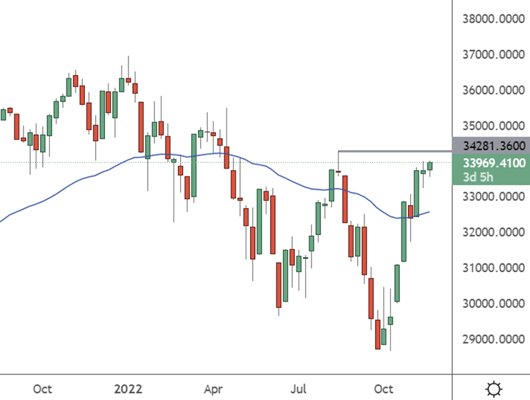 At the last meeting, the Federal Reserve began to pivot from its aggressive monetary actions by releasing a statement: “...the Committee would take into account the cumulative tightening of monetary policy, the lags with which monetary policy affects economic activity and inflation.”

The Fed acknowledged in that statement that It had already hiked rates significantly and could slow down the pace of raising rates in the future, waiting to see the effects on inflation. The last reading of inflation and core prices was softer, which will see the Fed pause soon to assess prices later.

Jerome Powell clarified that although the Fed could slow down in the next meeting, the final rate would be more than markets thought.

The Federal Reserve is ready to start smaller interest rate hike increments from next month. According to Cleveland Fed President Loretta Mester, this occurs as it fine-tunes its policy actions over inflation while keeping the economy strong.

“I think we can slow down from 75 at the next meeting. I don’t have a problem with that, I do think that’s very appropriate,” Mester said on CNBC. “But I do think we’re going to have to let the economy tell us going forward what pace we have to be at.”

The Fed raised interest rates by 75 basis points at the fourth consecutive meeting. Comments from a host of policymakers then followed, signalling an expectation to shift towards smaller increases in borrowing costs. This is to allow time for the economy to absorb the swiftest tightening of monetary policy in 40 years.

The central bank’s benchmark lending rate currently sits in a target range of 3.75%-4%. Investors expect a rate increase of 50 basis points at the Fed’s next policy meeting on December 13-14. Wednesday’s FOMC minutes will be an essential step to clarifying that prediction.