BTCUSD Hit By Interest Rate Hike From The Fed

The Bitcoin price was trading below the $19,000 level after the Federal Reserve hiked interest rates by another 0.75%.

Traders also saw the prospect of a similar move in November as the central bank remains committed to reeling in inflation. 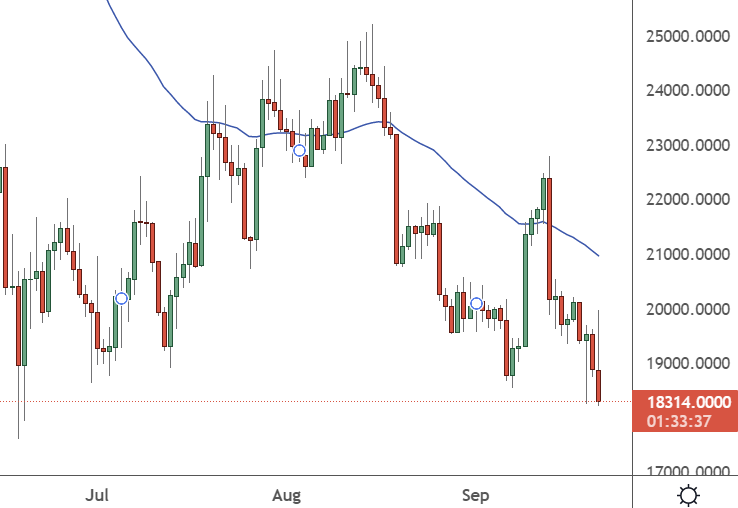 Bitcoin is approaching its June lows and a drop below that could be harsh for BTC.

US stocks led the market lower after the Fed hiked rates to 3.00–3.25% and added hawkish projections for further monetary policy action. Traders focused on the 2023 median rate forecast being raised to 4.6% from 3.8% in June. Some analysts are now seeing the chance of another hike in November.

For Bitcoin, the negativity stems from the US dollar, which is being lifted by the hawkish Fed. That also means that treasury yields are proving higher returns for the safe haven asset.

The decentralised finance (DeFi) sector attracted investors last year with high-yielding coins. The collapse of the Terra project and the rising US benchmark rate are taking further investment away.

Fed Chair Powell said the Fed will seek a return to sufficiently restrictive rates and that price pressures are evident across a wide range of products. The central bank continues to see inflation risks as being weighted to the upside. The chairman said that the bank would need to see real evidence that inflation was coming under control, but the most recent print was higher than analysts had expected. In addition, Powell also stated during his Q&A that to start cutting rates, the Fed would need to see inflation heading back towards 2%.

"Based on our expectation that the Fed will take rates to 4% by December, this will be one of the fastest episodes of Fed tightening in the post-war period," said Brian Coulton, chief economist at Fitch Ratings.

There was also negativity surrounding the Fed’s economic outlook, saying:

"Recent indicators point to modest growth in spending and production. Job gains have been robust in recent months, and the unemployment rate has remained low," according to the statement by the Federal Open Market Committee (FOMC), a group of Fed officials who set monetary policy.