Bank of America joins a collection of Wall Street’s largest banks with its Q4 earnings release on Friday.

The market will first get to see the latest inflation report from the United States economy on Thursday, and the sentiment from that could guide the stock’s path. 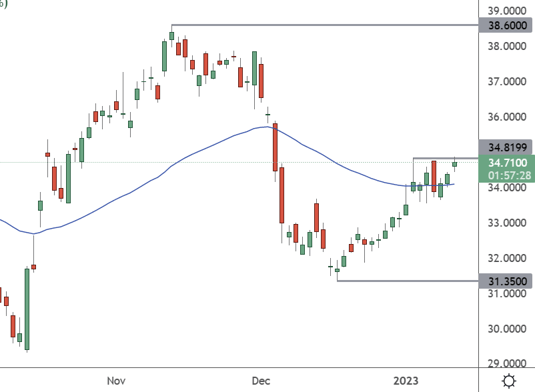 The price of BAC stock is trading at $34.71, a resistance level for the stock. The Q4 earnings will determine whether the following path is higher or lower, and traders can play the trend.

Bank of America is the second-largest US bank by assets, and it is expected to say that its net income fell in the fourth quarter. Higher inflation is hitting consumer demand, and investment banking deals are drying up. The bank is also expected to say that net income fell 9% to $6.5 billion from a year earlier. Revenue is likely to have risen 9% to $24 billion thanks to higher interest rates.

Higher rates have allowed banks to charge more loans, even with slow consumer spending. Banks may have a tough time boosting their net interest income in the months ahead as the Federal Reserve starts to slow its rate hike pace. That is expected to bring clouds over the banking industry, which has ridden the interest rate hike cycle to its peak.

It has not all been good news in the banking sector, with the companies setting aside more considerable sums for lousy loan provisions and cutting staff. Bank of America has been more moderate than its rivals, relying on organic turnover to shrink the workforce. Large banks are expected to see around 8% of their staff leave in a given year.