The week ahead is very quiet on the economic data front, and investors can look at the bigger picture.

With no data and thin markets, USDJPY is showing a test of a critical support level that should dominate price action in January. 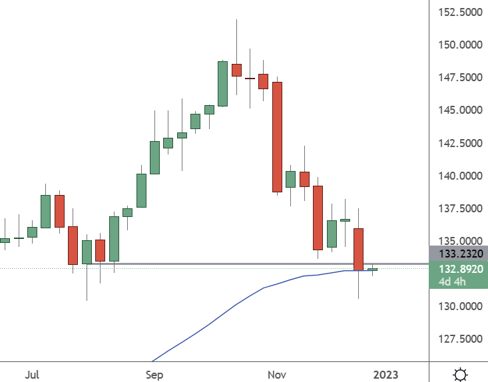 After soaring to 150 in late September, the USDJPY exchange rate has since slumped to 132.89. The situation has pleased the Bank of Japan.

As we move into the New Year, that 133 support level will determine whether we see a further pullback in the US dollar or an advance in the weeks ahead.

The Bank of Japan is still distancing itself from an end to stimulus and low-interest rates. “This is definitely not a step toward an exit,” Bank of Japan Governor Haruhiko Kuroda said on Monday. His comments are related to a recent shock decision to tweak the bank’s cap on yields, which has been in place since 2016.

Kuroda said the BOJ’s decision to widen the allowance band on its yield was to enhance the ultra-easy policy against withdrawing its massive stimulus program. He also noted that Japan’s consumer inflation will likely slow below the BOJ’s 2% target in the next fiscal year due to the effects of soaring import costs dissipating.

Kuroda added that wage growth will likely increase slowly due to intensifying labour shortages and structural changes in the Japanese job market. This would cause pay to increase for temporary workers and the number of permanent workers.

“Labour market conditions in Japan are projected to tighten further, and firms’ price- and wage-setting behaviour is also likely to change,” Kuroda said.

“In this sense, Japan is approaching a critical juncture in breaking out of a prolonged period of low inflation and low growth,” he said.

Investors will keep an eye on Japan’s inflation figures over the coming year as the US dollar has soared on higher yields for its government bonds.