USDJPY Has Key Support at 145 Level

USDJPY has been consolidating from the price surge this year.

The 145 level is the next target for bears ahead of US inflation data. 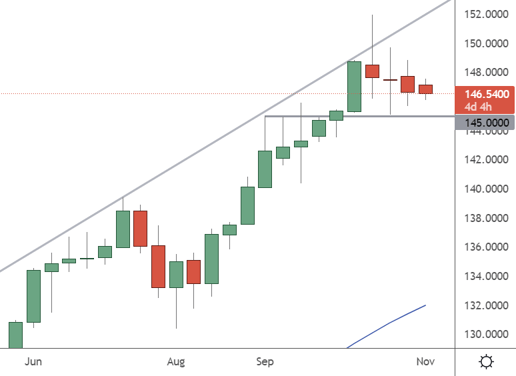 The US dollar versus the Japanese Yen is nearing a fourth-straight bearish week, and traders can focus on the 145 price level. That provided resistance in August and support in October.

The greenback has failed to rally despite another 75 bps interest rate hike from the Federal Reserve last week. Traders are likely seeing the potential for a slowdown in aggressive rate hikes from the FOMC.

In last week’s press conference, Fed Chair Jerome Powell said that rates would remain “higher for longer.” That means there will be no fast pivot, and funding differentials will stay in place for the dollar vs. the Yen.

The Bank of Japan had previously said that the “one-way” move against the Yen was a problem and made some moves to intervene in the markets. With that in mind, investors also see the potential for further gains eroding in the US dollar.

This week will add further knowledge to the situation with US inflation data on Thursday.

That is a sign that the aggressive rate hikes are slowly taking effect on the US economy, but the jobs market has remained strong.

After this week’s inflation data, traders can set up trading opportunities around the 145 support level.