How to Play Exxon Mobil Stock After Earnings

The company also saw record production at its Permian shale patch in the United States.

The weekly chart below shows the stock trading near recent highs, and the $105 level is now essential to support the stock. 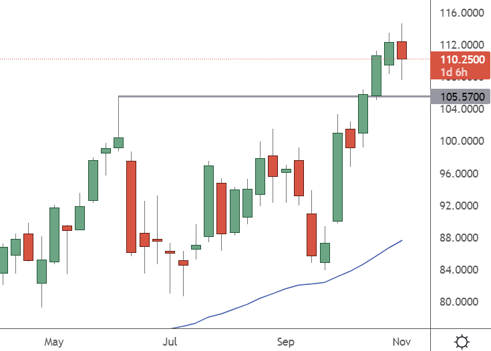 The latest move in ExxonMobil can be a breakout, where the price often retreats to test the support level. That could mean another pullback as oil has faded from its recent strength.

The risk for Exxon is likely political rather than financial after the company took some heat from the US President, who accused oil firms of benefiting from the Ukraine war. Talk of windfall taxes continues to dominate the political sphere of oil.

“Their profits are a windfall of war,” Joe Biden said. “It’s time for these companies to stop their war profiteering.”

“If they don’t they’re going to pay a higher tax on their excess profits,” he added.

Exxon’s profits in the recent quarter were $18.7 billion, almost triple what they were last year and the most in its 152-year history.

The US government has also tried to bring the price of oil down by releasing stocks from its strategic oil reserve. Biden announced the release of 15 million barrels of crude oil from the stockpile, marking a total of 165 million barrels sold since the beginning of the year.

Investors and traders can watch the $105 support level with oil and natural gas prices. However, politics may be a headwind for further price gains.