This article looks at the USDCAD exchange rate, which has an employment release ahead of Friday for the Canadian and US economies.

The current resistance level was at 1.3500 for further gains in the USD, but this failed. There is now a potential for a different retreat back to the 1.3225 level if the upside is capped here. 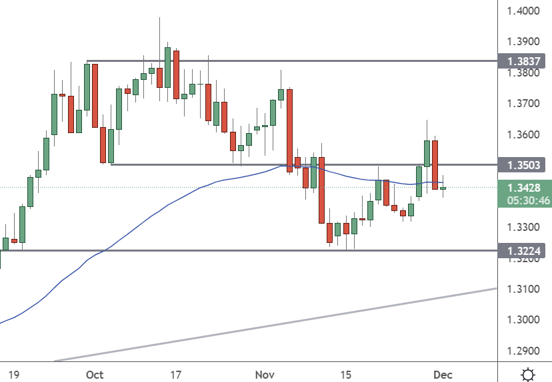 Both economies displayed signs of slowed growth this week with the disappointing US manufacturing data.

Canadian manufacturing activity also weakened for a fourth month as worries that the economy would slip into recession hurt demand. However, the data showed that the pace of contraction and a measure of inflation pressure eased.

The S&P Global Canada Manufacturing Purchasing Managers' Index rose to 49.6 in November from 48.8 in October. This was almost identical to the 49 in the United States, indicating that interest rates and inflation are hurting the sector.

"Both output and new orders continued to fall, although perhaps of some comfort is that the degrees of decline were softer than in October," Smith added.

"Moreover, cost inflation continues to ease as lower prices for several goods slowly make their way down the supply chain, while several firms added to their staffing numbers as they sought to address labour shortages at their plants."

The markets will now turn their attention to the economic data due on Friday, including job figures for both nations.

The US is expected to show a reading of 200k jobs added. That is lower than the 261,000 seen last month. The unemployment rate is expected to stay the same at 3.7 percent.