Oil has found support at the top of a long-term price channel and is now ready to push ahead. 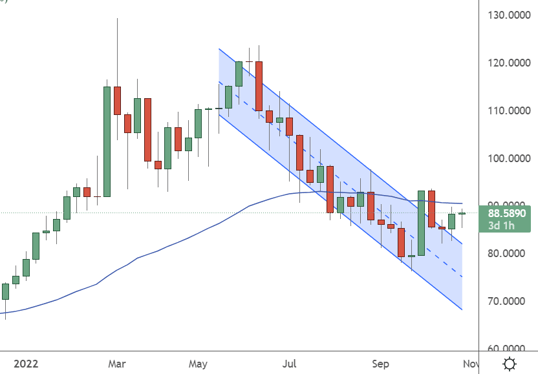 Crude oil has seen a typical breakout and pullback action with the price channel. Oil found support at the low $80 price level and will now look to move higher.

According to Goldman Sachs, crude oil prices may soar to $115 a barrel by April next year.

"You have a relatively tight supply situation going into 2023 that we think will create significant upside," Jeff Currie told CNBC.

Currie flagged a US halt to releasing supply from the Strategic Petroleum Reserve, the upcoming European Union ban on Russian crude in December, and the lack of drilling leading to a low level of US shale production. According to the central bank, all of those spur crude oil rallies.

"Our target for oil is $115 a barrel in the first quarter, but there's upside risk on that," Currie said.

Currie also said that production cuts had left OPEC+ with some "optionality" that could help to increase supply if there was an unexpected rebound in the global economy by April.

"The motivation for the OPEC production cut was concerns about a recession. Let me remind you that 90% of the CEOs in America tend to agree with them. "It's not our base-case forecast, and they're left with the option to increase production," Currie said.

The Brent and WTI benchmark oil prices ended higher in October. Shortly after the first monthly gains since May, OPEC said they would cut output by 2 million barrels per day (BPD).

Oil prices would also be driven by Wednesday's Federal Reserve interest rate meeting. Investors expect the central bank to hike rates by another 75 bps, but signal a slowing of their aggressive rate hikes.

The previous high for oil prices in June was at the $120 level, which will be the marker for a higher move over the next few months.