Oil gave up some of its two-day gains as traders remain cautious over a Chinese economic reopening.

Oil prices dipped on Wednesday over concerns that rising COVID-19 cases in China could slow its economic recovery as it unwinds its pandemic restrictions.

Oil rose to its highest in three weeks on Tuesday as traders hope for a fuel demand boost. China said it would halt its quarantine for inbound travellers on January 8. However, Chinese hospitals have been under pressure due to a surge in virus cases. 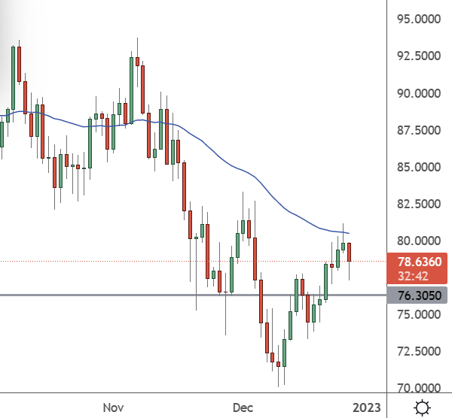 Oil traded at $80 on Tuesday but slipped to $78.63. The resistance is now set for further gains in the near term.

US crude inventories dropped by 3.1 million barrels for the week ended December 14. That was very different from a build of 7.8M barrels reported by the API for the previous week. Economists had been expecting a draw of 167,000 barrels. The more significant draw in oil stocks came as fresh demand worries circulated among traders. Large storms over Christmas are also set to disrupt energy demand, with production being shut down in certain areas.

However, traders noted that trading volumes this week are lighter-than-usual as the end of the year approaches, adding to the volatility in oil prices. Next year will continue to add uncertainty with China reopening, lower Russian output, and further OPEC+ cuts. Russia announced that it will ban oil sales from February 1 to countries that abide by a G7 price cap imposed on December 5.