Italian Stocks Are Under Pressure From Election Results

The benchmark Italian stock index looks like it may fall further on the weekly chart after the country installed its first far-right leader in decades.

The election result also rattled European officials in Brussels, with EU Commission President, Ursula Von Der Leyen, saying that the EU has "the tools" to deal with member states if things "go in a difficult direction."

Is this the Europe we want?... That Eurocrats in Brussels dictate what the government should be. " Morawiecki said. 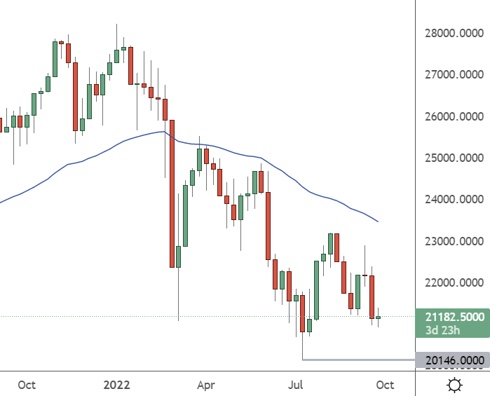 However, politics aside, the election result could make for a tense relationship between the country and the EU. That will not be lost on investors, while other investment firms may try to distance themselves from the country.

The ITA40 index is trading at 21,182, but there may be an imminent move to the 20,000 level. That would be the test for deeper losses in Italian stocks.

Italians overwhelmingly voted for Georgia Meloni and her Brothers of Italy party. They will be supported by coalition partners Matteo Salvini and Silvio Berlusconi. Financial markets were not phased on Monday, with the ITA40 outperforming other markets, but it may be short-lived. Analysts said a clear victory would give the country the chance of a stable government for a full five-year term, which has been rare in Italian politics in recent years. Some comments from Meloni have also suggested that she will not rush into any confrontation with the EU over its economic and budgetary policies.

Despite that, the country’s huge national debt, low growth, and a dangerous global market backdrop leave the new and inexperienced at risk. ING economist Paolo Pizzoli said the result provided "enough votes for the right-wing coalition to ensure stability but not too much so it can change the constitution with a two-thirds majority."

In the end, large financial investors will have their say on the direction of Italian stocks.