How is EURGBP Affected By UK Surged Inflation

EURGBP was higher after the latest inflation figures from the UK marked a 41-year high at 11.1%.

The latest figure is a full percentage point jump from the previous month and blew past the predicted 10.7%. 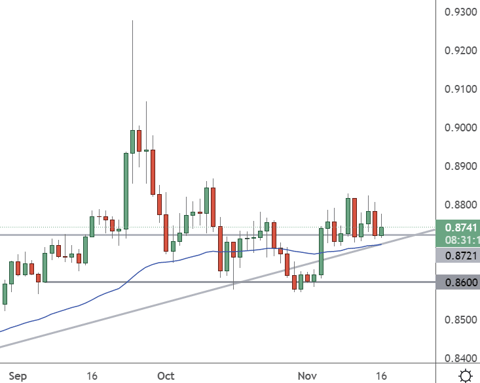 EURGBP prices are trading just above the June high, but there is room to move toward the 0.8600 level. The Bank of England will have to go further on interest. Still, paradoxically, that can weaken the pound with a slower economy.

Traders will now focus on the coming budget from the new Chancellor, Jeremy Hunt.

Consumer prices jumped to 11.1% in the 12 months to October, the highest since October 1981, the Office for National Statistics said on Wednesday. The ONS said that inflation would have been even higher at around 13.8% in October if the government had not intervened to cap household energy bills at £2,500 a year on average.

Hunt will now deliver a new austerity budget on Thursday. That could be a significant driver for the pound sterling as he said, "tough but necessary" decisions were needed.

"It is our duty to help the Bank of England in their mission to return inflation to target by acting responsibly with the nation's finances," he said.

The Chief Economist at the Bank of England had said last week that there was more to come from the central bank on interest rate hikes, and this data will underline that.

"The UK is in a fairly unique situation where the government is planning a vast program of measures to help balance its books," said Ellie Henderson at Investec.

"The scale of fiscal tightening proposed will no doubt drag on economic growth and, as such should bring inflation down with it, opening the door for the Bank of England to tighten policy at a less aggressive pace."

An analyst at JP Morgan commented: "These numbers sit uncomfortably alongside the message sent from the Bank of England...when it argued that only modestly higher interest rates would be necessary to bring inflation back towards its 2% target. We are not so convinced."

Jeremy Hunt's budget will be the big focus, and he hopes markets will welcome it after the Liz Truss market panic.