GBPJPY Could Move with GDP and Inflation

GBPJPY will focus on the critical economic data for Thursday, with a UK GDP confirmation and a Japanese inflation number.

The GDP growth figure may stay within expectations. Still, traders will watch the Japanese number after the BOJ surprised the markets earlier this week. A cascade of selling the GBPJPY is observed. 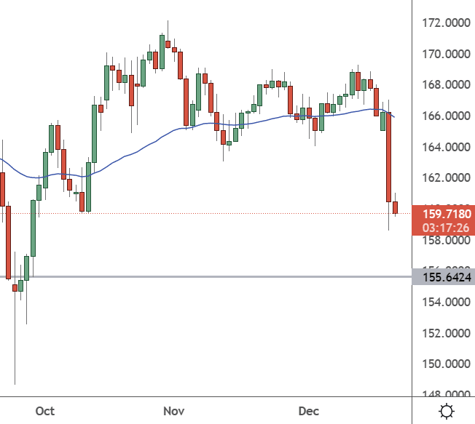 After starting the week around 166, the GBPJPY exchange rate was smashed lower to 159.70. More considerable support comes in at the 155.50-60 level.

Economists expect a reading of 2.4% year-on-year growth for the UK for the third quarter. A deviation from that figure may move sterling. Still, traders are already anticipating a worsening in the country's prospects, with the Q3 number buoyed by a post-royal funeral bounce.

The essential data point will be the Japanese inflation rate which has climbed steadily this year from 0.5% to 3.7%. Unlike other central banks, the BOJ has stood by and let the market forces work. That could mean another higher inflation number tomorrow. The October number jumped from 3 to 3.7%, and a repeat could add to the recent substantial gains in the Japanese yen.

The Bank of Japan shocked financial markets with a tweak to its bond yield cap.

In its recent policy statement, the BOJ said that the bond yield move was intended to "improve market functioning and encourage a smoother formation of the entire yield curve, while maintaining accommodative financial conditions."

The BOJ surprises markets by altering its yield curve control (YCC) policy which has been in place since September 2016. The BOJ will allow the 10-year Japanese government bond yield to move 50 basis points on either side of its 0% target, up from 25 basis points. The move is aimed at cushioning the effects of continued monetary stimulus measures.

The yield curve control mechanism was introduced to lift inflation toward the bank's 2% inflation target after a prolonged period of economic stagnation and zero inflation.