EURUSD Dips at the 1.07 Resistance Level

EURUSD has dipped at the 1.07 resistance level and could see a dollar recovery.

The market now awaits FOMC minutes from the recent FED meeting, which will be released ahead of the Asian session. 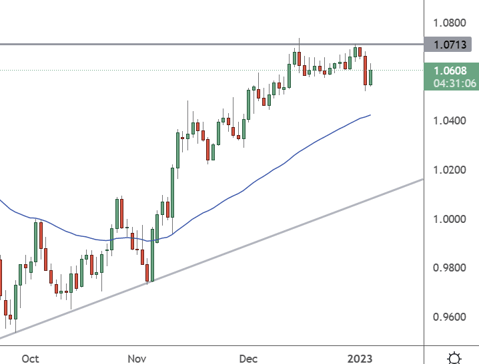 The first support level for the EURUSD exchange rate is at the 1.04 level. That marks the 50-moving average with further support at the 1.02 price level.

ISM manufacturing released on Wednesday came close to expectations with a slight underperformance for the US manufacturing sector. The Institute for Supply Management (ISM) said its manufacturing PMI dropped to 48.4 last month from 49.0 in November, slowing for a second straight month.

That was also the weakest reading since May 2020, which saw the index just below 48.7, which the ISM says is consistent with a recession in the broader economy. However, the labour market is still strong and holding up consumer spending. That makes it less likely that a recession is coming. A PMI reading below 50 indicates a manufacturing contraction, accounting for 11.3% of the US economy. Economists polled by Reuters had predicted the index dropping to 48.5.

The Federal Reserve is on the fastest interest rate-hiking cycle since the 1980s as it seeks to tackle inflation-hurting consumer demand. Wednesday's focus will be the release of minutes from the latest FOMC meeting. Investors will be looking through those notes for any hints of policy changes. However, the FED has clearly planned to keep rates high rather than a reverse course.

That should keep the dollar strong despite a European Central Bank that aims to play catch-up on rates. Inflation data showed a better-than-expected fall in French inflation, which also helped the greenback.