What is the Federal Open Market Committee (FOMC) meeting?

The Federal Open Market Committee (FOMC) meeting is a regular session held by members of the US central bank, the Federal Reserve (FED). At the FOMC meeting, its members vote on the future of US monetary policy. Typically, they will set the discount rate, which is the interest rate at which US banks can borrow money from the Federal Reserve. The FED has the power to lend and print an unlimited amount of money, therefore the discount rate it sets becomes a benchmark for all banks. If the interest rate of all other banks is higher than the discount rate then a bank can borrow money from the central banks at the discount rate, instead of borrowing from its peers. This means the FED funds rate, which is the rate at which banks charge each other, does not deviate too much from the discount rate. During the FOMC meeting, decisions are also made on quantitative easing or quantitative tightening programs. These programs are where the FED buys and sells government bonds.

When is the next FED meeting?

The next meeting will take place on June 18-19, with any policy changes announced on June 19, 2019. From 2019, the FOMC publishes a statement as well as holding a press conference, to answer questions from the media.

How does the FOMC meeting affect markets?

On the second day of each rate meeting, the FOMC shares its view on the US economy and addresses any possible changes to the US monetary policy. The central bank's tries to influence the state of the US economy and its inflation path via interest rates and quantitative easing or tightening programs.

However, in the immediate future, decisions will be taken on short-term interest rates. This normally has a direct impact on bonds, Forex, and stock indices.

Forex: the overnight charges (swap rates) that you receive or are charged by your broker, are typically based on a three month LIBOR rate, which is directly affected by any actual and anticipated changes to the discount rate.

In short, an increase in the FED funds rates tends to strengthen the US Dollar, as investors and traders are now paid higher interest rates by holding dollars. However, if the FOMC decides to lower interest rates or introduce quantitative easing, the dollar tends to soften, as the discount rate is now lower.

Stock market indices, such as the S&P 500, will at times react strongly to the FED’s actions, depending on the state of the economy. A critical time is when the economy is running hot, and the Fed aggressively increases interest rates to combat the economy from overheating. Another critical time is when the economy is heading towards a recession, and the economy needs lower rates to return to growth. The FOMC decisions influence interest rates and bond rates, and in the long run, they tend to affect the real economy as higher interest rates will make mortgages, credit card spending, auto loans, and student loans more expensive and vice versa. For the stock market, it increases corporate borrowing and debt servicing costs.

What is the Federal Funds rate?

What is Federal Reserve Quantitative Easing?

In the last decade, Quantitative easing (QE) was an extra measure introduced by the Federal Reserve, as the discount rate was about to reach the zero bound and the FED was not ready to impose negative interest rates to boost lending. But the zero-bound discount rate was just one part of the problem. As the discount rate is a short-term interest rate, it will influence short-term lending between banks, and not have a direct impact on longer-term bond rates, such as the US ten-year government bond yield or the 30-year mortgage rates of homeowners. Instead, QE was introduced, to allow the Federal Reserve to buy an unlimited amount of bonds on the secondary market to artificially lower interest rates, where they were deemed as most necessary. During the financial crisis of 2008. The Fed’s balance sheet more than doubled to reflect these bond holdings. It doubled again during the 2015 European debt crisis. A tapering of assets to unwind some of the holdings began in 2017 but was halted abruptly due to the pandemic. The Federal Reserve balance sheet was almost nine trillion dollars in 2022- 900% higher than the level in 2008. 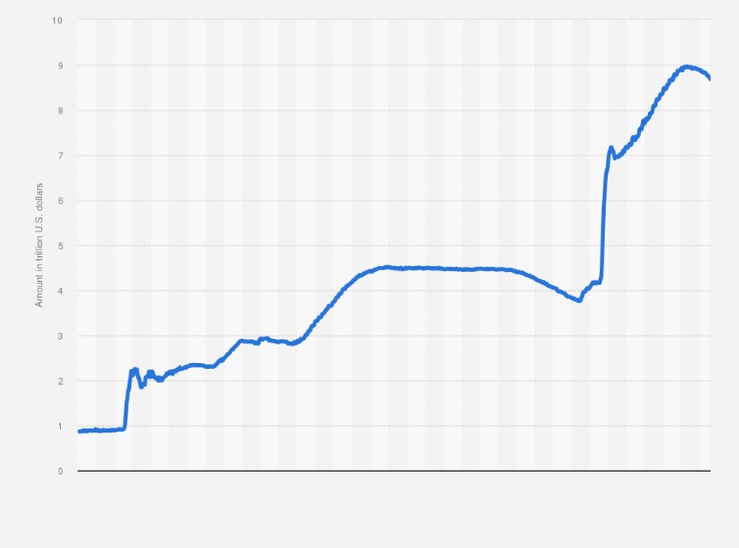 The FOMC meets eight times a year, but in rare cases, they can also arrange an emergency meeting. Policy changes are announced at the end of each meeting, and starting in 2019, a televised press release follows each meeting. The televised press release offers additional insights behind the thinking of the FED, as journalists are given the opportunity to ask questions. The minutes of each FOMC board meeting are made available to the public three weeks after the FED meeting.

History of the FOMC

In 1913, the Federal Reserve was made up of twelve geographical districts, each with its own Reserve Bank. The locations were based on the prevailing trade regions that existed in 1913, and don’t coincide with current state lines. The original idea was that each Reserve bank would independently set a discount rate to serve each region best. However, by 1933 and 1935 the US economy was so integrated that the FOMC was born. The FOMC has since decided on the discount rate for the whole country.

The Federal Open Market Committee is made up of seven members of the Board of Governors of the Federal Reserve, and these members are appointed by the US president, the president of the New York Fed, and four other Fed presidents.

The chair of the Federal Reserve, currently Jerome Powell, is the most important member of the FOMC. Powell’s views tend to be centrist in relation to the views of the other Fed and FOMC members. Members are then classified as “doves” or “hawks.” Hawks are more supportive of market forces and tighter monetary conditions. Doves, on the other hand, prefer having low-interest rates and stimulus measures to support the labour market and the economy. The relationship between hawks and doves is widely followed in between each meeting.

What is Coronavirus, and which countries are affected? Covid-19, is an individual virus an...

Trading during the US-China Trade War

What is a Trade War? A trade war is when one country raises its tariffs on imports, in ret...

Since February 2019, the Bank of England base rate of interest is 0.75%. The change was made public through the Bank of ...