The EURGBP bounce has been slow to get moving, but now the UK Prime Minister has resigned.

Liz Truss stepped down after only 45 days on the job. The pound could get a boost if the economic and political uncertainty ends. 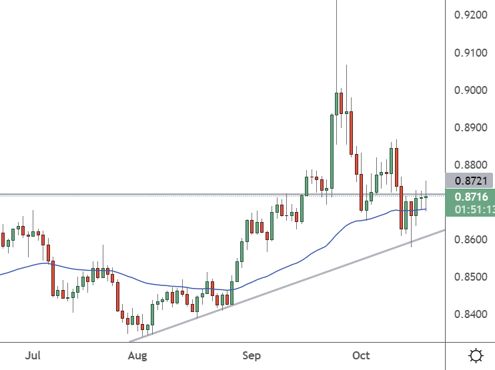 Conservative party members are set to elect a new Prime Minister this week after Liz Truss resigned, stating she cannot deliver her mandate. The historic resignation makes her the shortest-serving PM in British history, and there have been calls for a national election.

While Ms. Truss has resigned, she has the power of the Prime Minister for another week. The rules state that an off-timetable national ballot can only happen if two-thirds of the House of Commons voted for it. Another way it happens is when the government loses a vote of no confidence and MPs can’t choose a replacement in the following 14 days. Nine Tory MPs have lined up to replace the PM, and even Boris Johnson could make a surprise comeback.

There will be no more economic data for the euro or pound, and investors will keep their eyes on the political moves. Business leaders have called for an end to the “circus” of recent weeks, and we could see the pound recover soon.

Industry bosses have been unanimous in their statements against the recent political turmoil, which has caused investment in the UK to stall. Tony Danker, director general of the CBI, said he believed half of the companies considering investments would wait until the situation had stabilised.

“The politics of recent weeks have undermined the confidence of Britain’s people, businesses, markets, and global investors,” said Danker. “That must now end if we are to avoid more harm to households and firms.

Danker had said it was a “turning point for our economy” when Truss and Kwasi Kwarteng announced their “growth plan” on 23 September. But, that mini budget quickly triggered market turmoil, eventually leading to Truss’s downfall. Danker now says the UK needs a “credible fiscal plan for the medium term as soon as possible and a plan for the long-term growth of our economy.”

Paul Drechsler, CEO of BusinessLDN, said the UK was in the grips of an “unmitigated political and economic crisis,” and the government would need a “rock solid” cabinet and a new leader.

Traders can look at the current level as a crossroads for the pair, and next week brings German data in the form of IFO business sentiment and consumer confidence. Thursday brings the critical European Central Bank interest rate decision with a 75 bps hike expected.