The Dow Jones had given up 110 points one hour and 20 minutes after the release of the latest US Retail Sales report. The report for October showed that US retail sales increased by 0.3% from September, and this was lower than the expected outcome of 0.5% projected by economists. The prior month’s reading was also revised lower. However, as seen from last year, retail sales in October was 5.7% higher. Annual US inflation was 1.2% in October, suggesting that inflation-adjusted annual Retail sales rose by 4.5%.

The biggest losers are clothing stores that saw a drop of 30% of their sales from October 2019. Gasoline stations are seeing losses of 16.1% of their sales, and Restaurants and drinking places have lost 19.3%. Instead, people have been buying building materials, food and drinks to eat at home.

Learn more about indices trading with us

What does the soft Retail Sales report mean for the Dow Jones?

The lower than expected growth in Retail sales figures has fast-forwarded the unavoidable price correction that was pending in the Dow Jones. From its November low the Dow Jones rose by 15.68% to reach a high of 30091. The move towards the new all-time high occurred on the news of the Pfizer COVID-19 vaccine on November 9. This week, on the news of Moderna adding a good functioning COVID-19 vaccine candidate, the Dow Jones attempted to trade higher, but the index failed to trade above the November 9 high.

I think the lack of follow-through is due to the market being short-term overbought. It could also be a case of the markets having successfully priced in an end to the COVID-19 crisis. I personally think that there is more upside to the markets but I would not be a buyer at current levels as too much of the good news has been priced in.

The Dow Jones remains in an upward trend and will continue to do so as long as the index trades above the 28594 level, this level is just below the November 12 low at 28916. As the price trend is upwards, I think traders will be happy to buy in the 28594 to 29229.8 interval.

If the Dow Jones indeed bounces from the above-mentioned interval I think we might see a retest of the all-time high at 30091. However, a break to the 28594 levels will probably end the very short-term trend and could send the Dow to 28,000, followed by the 61.8% Fibonacci correction level at 27602. The Fibonacci levels are derived using the November low and the all-high.

What is your take on the Dow Jones? Interact with Alex via Twitter @AlexFX00.

How to trade indices with ATFX

Looking to trade the world’s main Indices on an award-winning MT4 platform? Sign up for a live or demo account with ATFX to get up to speed. Start trading now to benefit from our highly competitive spreads on indices.

2. Open MT4 either on your desktop or mobile

3. Search for Dow Jones in the market watch or symbols window

5. Hit buy or sell, and then confirm the trade 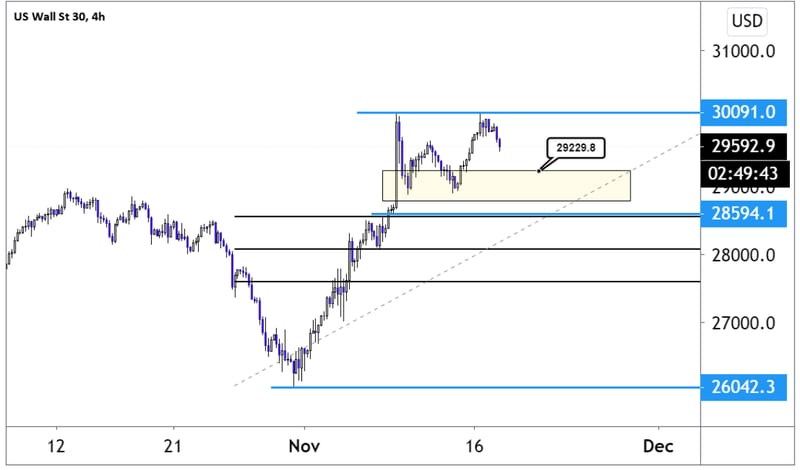 To see all upcoming news and data releases that’ll have an effect on the financial markets, check out our Economic Calendar. It’ll cover all major releases from global economies and give you the exact time the release is due, the previous data, forecast data and actual data (once released).

In response to a new wave of coronavirus infections sweeping across Europe, the President ...

The Fed’s decision to bring Q2 GDP on stage, the dovish stance may collide with strong economic growth

This week the market will usher in heavy guidance, including the Federal Reserve resolutio...

Bitcoin price bubble re-emerges, how high can BTCUSD reach in 2021?

The mania in cryptocurrencies is back, and Bitcoin prices, BTCUSD, are just 1200 USD from ...

It can be said that for retailers of all shapes and sizes 2020 to date has been a challeng...

Cineworld share price could slump to 33 from 44.79 as cash reserves run out

Cineworld share price had a stellar return of 331.23% from its October low to November hig...

Bitcoin price bubble re-emerges, how high can BTCUSD reach in 2021?

Cineworld share price could slump to 33 from 44.79 as cash reserves run out

Cineworld share price had a stellar return of 331.23% from its October low to November high. However, from today, the Ci...