Bitcoin (BTCUSD) under pressure as it approaches July lows

Bitcoin prices under pressure once again as the crypto leader tested the July lows of $19,000. 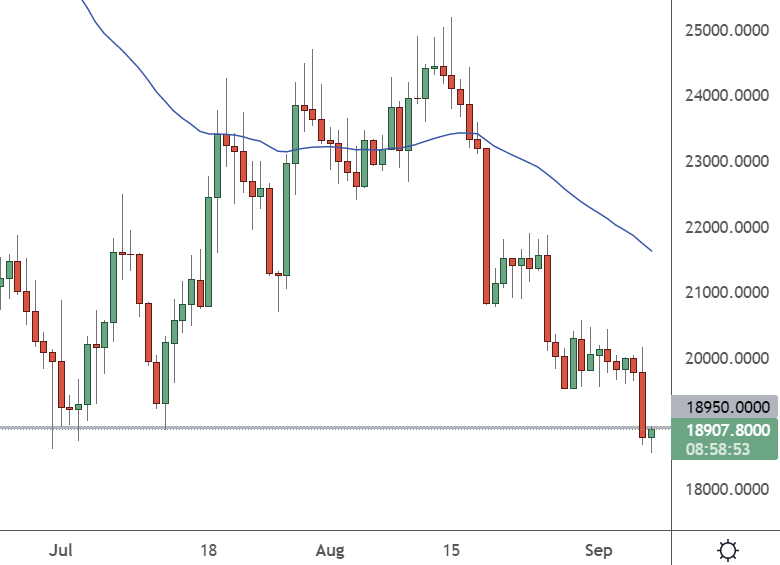 A rally in the coin ran to the $25,000 level in mid-August but has fizzled out to trade again at the lows of early July. Bitcoin is following the commodity sector lower as an alternative, and pro-growth investments continue to suffer under the weight of central bank rate hikes.

The Bank of Canada went ahead with a 75bps rate increase on Wednesday, and the European Central Bank is set to follow on Thursday with expectations of a similar move.

These interest rate moves make safe haven investments such as bonds more appealing. Bitcoin has also suffered in the near term as Ethereum has grabbed investor attention ahead of its merge update.

The general cryptocurrency market is being dragged lower by ongoing strength in the US dollar. The greenback hit a 24-year high against the Japanese yen and set an all-time high against the Indian rupee. That weighed down stock markets, and the tightening of credit means that the tap has been turned off, where the easy money was invested into rising stocks. Profits from that trickled down to crypto markets, and we are now in reverse.

At the moment, it would be dangerous to catch a falling knife, and Bitcoin investors should be leaning toward the short end. A smaller ECB rate hike tomorrow could help BTC, but that would also boost the dollar. Tomorrow’s ECB meeting and the resulting press conference comments will also be important for the crypto space.

The worry for BTC going lower is that futures trading has reached an all-time high of 565,579 BTC ($10.6 billion) in open interest, above the February peak of 548,096 BTC, according to Arcane Research. Any further selling could see further liquidation and a lower spike in the cryptocurrency market.