The Reserve Bank of New Zealand (RBNZ) has again taken an aggressive step toward reducing the rising inflation within the country by raising its official cash rate by 50 basis points. The current interest rate hike by 50 basis points aligned with the market expectation ahead of the committee's session last night.

The news caused a rapid spike for NZDUSD, with the price jumping to $0.6381 during the Asian session today. The price is currently ranging at $0.6342 during the European session today. And with the increasing volume of buyers coming into the market, analysts believe the bullish trend will probably endure throughout the week.

The New Zealand inflation rate rose 7.30% YoY during Q2, marking its highest level since Q2 1990. The RBNZ reckoned that it remains appropriate to continue with its tightening policy till prices fall back to fair stability, which supports economic growth and maximum employment.

This has pushed the RBNZ into taking more aggressive actions toward controlling its inflation rate by raising the official cash rate by 50 basis points marking its fourth consecutive interest rate hike at the same rate since May 2022. This has brought New Zealand's cash rate to a seven-year high of 3.0%.

The committee hopes to raise interest rates to at least 3.69% by the end of 2022. Followed after with a peak at 4.1% during the second quarter of 2023. This suggests that at least two or more interest rate hikes still await the New Zealand dollar within the remaining three sessions of the committee meetings in 2022.

The RBNZ raised its interest rate by 2.75% within ten months after it embarked on rate tightening, which started in October last year, designed to control the rising inflation. Raising its rate from 0.25% in October 2021 to 3% in August 2022 was to end the year near 4%. This has placed them above other countries' monetary policymakers, including the US Fed Reserve and BoC, which have raised their rate by a total of 2.25%. 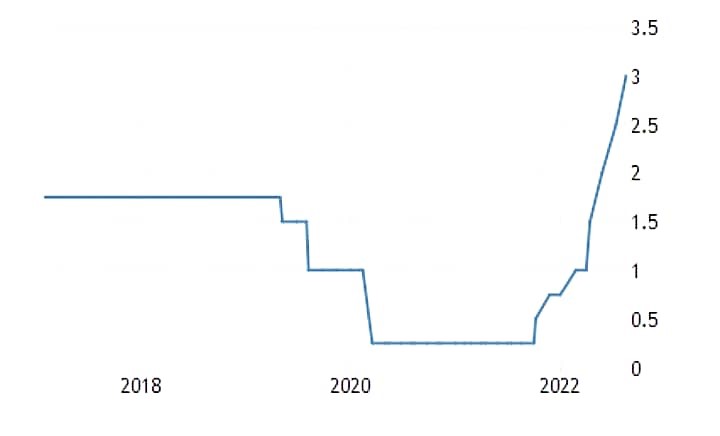 RBNZ Governor Adrian Orr told reporters that after the official cash rate attained the 4% significant level, the committee would have done enough to control the rising inflation.

Analysts such as Goldman Sachs Group foresees the nation as dangerously heading into a recession by 2023 if nothing is done to support the labour market.

Many question the capacity of the New Zealand labour market to withstand further interest rate hikes, especially with its unemployment rate rising to 3.3% in Q2 2022 against the previous record of 3.2% in Q1.

Against these doubts, the RBNZ still believes that the labour market remains strong beyond the maximum sustainable level and can withstand further interest rate hikes without the economy risking recession.

Speaking further on this, the committee reported that the rising energy cost had placed many demands on the economy and affected the labour market's performance in Q1 2022. Here they believed that the output of the labour market was constrained by the disrupted global supply, labour shortages, and high levels of sickness from COVID-19 and other illnesses. However, they foresee a renewal of the labour force as the rising energy cost gradually gives way to sustainable economic growth.

What impact will the current official cash rate increase have on NZDUSD?

Interest rate hike for any given currency is known to strengthen that currency over time by attracting more investors to buy the currency.

The expectation of a more aggressive interest rate hike for the US dollar by at least 75 basis points during the next Fed session will slow down the performance of the NZDUSD.

Forecast for NZDUSD with the current official cash rate increase

NZDUSD would be expected to continue its bullish trend throughout the week. With the significant target at $0.6465. The rising dollar index hopes for a more aggressive interest rate hike for the US dollar during the next Fed session in September. In this case, we might witness intermittent draw down for NZDUSD with the main support level at $0.6285.