Is This a Low for NZD Versus the Greenback?

In recent weeks, the New Zealand dollar has been on a rough downward path against the US dollar. After stopping at a critical support level, is this the base for the NZDUSD exchange rate?

The New Zealand dollar vs the US dollar has bounced at the 0.5585 level and is now looking at economic data to continue the bounce. 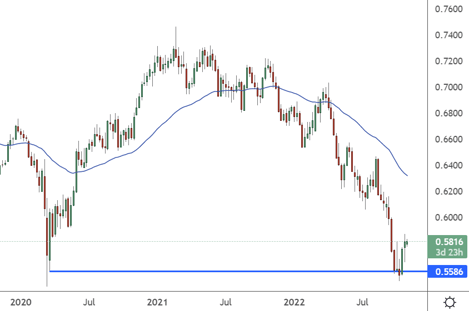 The New Zealand dollar has economic data released Wednesday with the Reserve Bank of New Zealand Stability Report. That will be followed later by a press conference where traders will get to ponder the latest monetary policy thoughts from policymakers at the RBNZ.

The Kiwi dollar will also see the release of employment figures with a Q-on-Q employment change of 0.5% expected for the third quarter. That will increase from 0% last month when employment stalled for the country. The unemployment rate is also expected to dip to 3.2% from 3.3% in the latest quarter.

The New Zealand dollar could benefit from that because the Federal Reserve in the United States is expected to halt its aggressive rate hike policy after this week. If the Kiwi jobs market is holding up, then there is still room to manoeuvre the interest rate after the RBNZ slammed on the brakes.

For the US central bank, this Wednesday will be a critical event with the FOMC policy decision and the press conference that will follow.

Stocks have rallied hard, believing Federal Reserve Chair Jerome Powell will slow down the bank’s policy moves from December. A hint of a turnaround could fuel a further rally in the NZDUSD exchange rate.