The GBPUSD exchange rate has seen its recent rally rejected at the 1.1600 level.

With US inflation and the UK GDP growth figures ahead, traders have an opportunity for a swing trend. 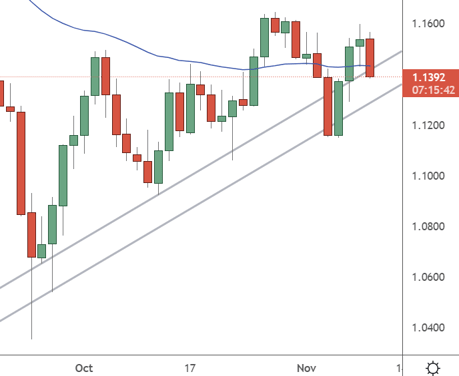 GBPUSD is playing with two uptrend support lines and can start to test the lower levels again if the data comes out in favour of the greenback.

The latest US inflation data was released after Federal Reserve Chair Jerome Powell said that rates “have a way to go” before they reach their peak. However, tomorrow’s data is expected to show a dip to 8% from 8.2%, which may not support the USD.

The essential data point could be the UK GDP growth figures on Friday, which is expected to show the country is in a recession. Analysts expect a 3-month average of -0.5% for the economy into the end of September. The year-on-year figure is revised down to 0.9% from 2% previously.

The British economy has been hurtling towards a recession after aggressive rate hikes from the Bank of England. Its Chief Economist has suggested there are more to come.

Huw Pill said: “I think we cannot declare victory against second-round effects, but we are entering a recession. That’s a difficult trade-off environment for monetary policy. “We are meant to manage this trade-off to avoid unnecessary, counterproductive disruptions to the real economy.”

The Bank of England has raised interest rates from 0.25% this year to its current 3% level.

Investment bank JP Morgan warned that the UK economy will be 10% smaller than its pre-covid level when it exits an expected two-year recession.

Last week BoE governor Andrew Bailey warned the UK economy will contract eight quarters from this winter, marking the most prolonged recession in a century.

“Remarkably, the Bank’s projections do not include any fiscal tightening that is to be announced on November 17 (perhaps worth two percent of GDP) and assume fiscal policy will be used to protect households from half of the rise in energy prices that would occur from next April based on the current forward rates,” JP Morgan said.

Traders can play the GBPUSD for a double dose of economic data in the next two days, and we should not be surprised if there is a downside surprise for the British pound.