GBPUSD Still Under Pressure Ahead of BoE Interest Rates

The US dollar was stronger against the pound sterling on Wednesday after that Fed move.

Next up will be the Bank of England on Thursday, but the bears are still in control. 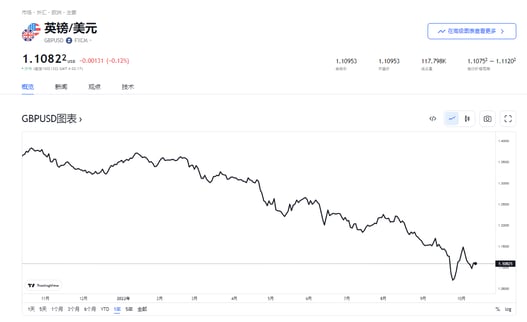 The BoE is expected to hike rates to 2.25% this time around, but that may not spur a revival in the pound.

UK inflation dipped to 9.9% year-on-year in August, according to the Office for National Statistics. Economists are still not sure that it marks a peak for inflation. The bank also predicted a 13.3% increase in inflation by the end of this year.

However, there was criticism of the government from a former BoE policymaker.

"There is a role for a monetary policy committee, but it must be accountable, and it must be representative," Professor Danny Blanchflower said.

He said the latest government economic plan believes current plans are in "total disarray". "I have never in my 50 years of doing economics seen anything as bad as this," he added.

"Let's keep our eyes on what's going to happen to the pound here," John Hardy, head of FX strategy at Saxo Bank, said on CNBC.

"The Bank of England has to go to 75, it has to match its global peers here when we have seen cable [GBPUSD] trading at its lowest level since 1985. It would really be quite a tone-deaf performance from the Bank of England if they didn’t go for 75 basis points at this week’s meeting."

The Federal Reserve raised its rates by 0.75%, which should give the BoE a green light to follow suit. The pound could continue its descent if they don’t, with the pair already at 37-year lows.

The next target for GBPUSD is 1.10 on the downside, with resistance around 1.15.