The Reserve Bank of Australia will meet again on Tuesday to announce their latest monetary policy plans.

GBPAUD has rallied after the Reserve Bank of Australia hiked interest rates by 50 basis points as expected. The bank’s governor, Philip Lowe, did not provide much of a forecast in his accompanying speech, and the Australian dollar sold off. 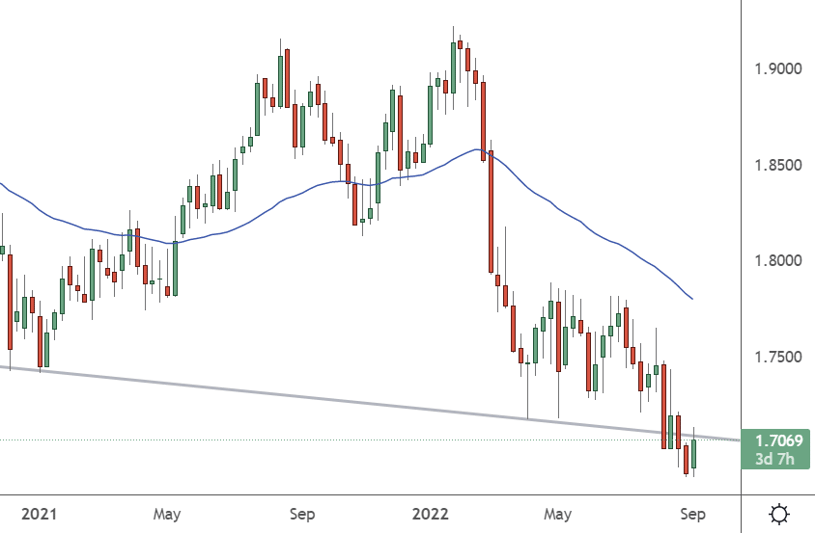 As we see on the weekly charts, the Australian dollar was probing some new lows versus the British Pound, but Sterling is trading at 1.70 and will want to secure that level with a strong trendline.

Traders are a little unsure of the bank’s next path, but the RBA expects inflation to peak below 8% before the end of the year, with a drop to 3% by 2023. The Australian economy is in decent health with a strong labour market. However, property prices will be a focus point after a recent slide.

The market will now await an update on Australian GDP growth on Wednesday. Economists are expecting a 3.5% print for GDP in Q2, which would follow a 3.3% gain from Q1. These numbers are much stronger than what is presently observed in the UK and Europe, and the dollar has the upper hand.

The pound sterling is looking to secure a low with the announcement of a new Prime Minister in Liz Truss. The country’s new leader will have to tackle a list of problems from her first day in the job, which includes soaring inflation, slowing wages, and high energy bills.

The UK is already on the brink of a recession, which will make the job more difficult as any action taken to help families will increase the UK’s already bloated debt levels. Truss is expected to spend up to £90 billion on plans to cap soaring energy prices and provide help for households and businesses.

With these points in mind, it may be hard for the British currency to see a sustained rally, and we should watch how the pound reacts to headlines from the new government around the key 1.70 level. The pound failed to find buyers at the 1.775 and 1.750 levels, but the economic outlook has since deteriorated.