EURUSD should face a volatile week with a European Central Bank meeting on Thursday. Before that event, we will have final GDP figures for Q2 released on Wednesday. 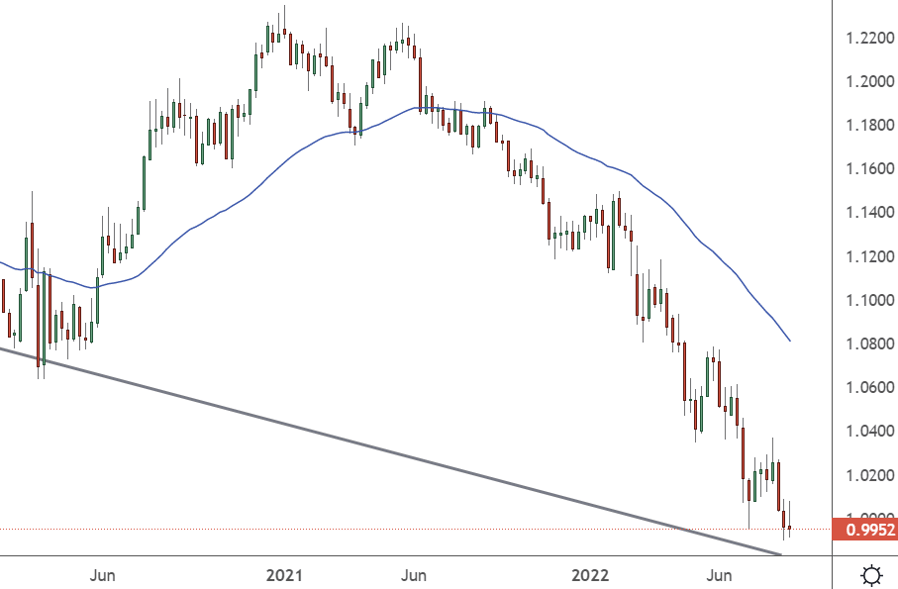 EURUSD has been struggling lately and trades below parity after a surge in the US dollar. The Federal Reserve has moved more rapidly on interest rates, but the economy is also holding up better stateside and Europe faces some tough days ahead in the winter with risks of gas shortages.

It could be a historic week for the euro, with policymakers expected to move ahead with the largest rate hike in the history of the Eurozone. Despite a surprising rate hike at the last meeting, analysts still see the ECB as being behind the curve on interest rates. Two-thirds of respondents to a Reuters survey said that the central bank had acted too slowly on inflation, which saw new 40-year highs at 9.1%.

Economists are now expecting a 75 basis-point rise at this week’s September 8 meeting. The ECB will outline their plans to "continue hiking rates to bring down inflation," according to ING economist Carsten Brzeski. "The unanswered question is still how the ECB’s reaction function will look in what increasingly looks like a severe winter recession."

One voice calling for an aggressive rate hike was Bundesbank chief Joachim Nagel. "Monetary policy must react decisively in order to preserve the credibility of the inflation target," Nagel said. "Data from a number of countries shows that frontloading, or bringing interest rate increases forward, reduces the risk of a painful economic downturn."

"We should not delay further rate hikes for fear of a possible recession," he said. "Inflation rates will not return to the central bank's inflation target on their own," he added.

The current trajectory for the euro is downwards, and the euro may be at risk of further losses. If markets are already expecting a 75-basis point hike, then there is no surprise element at next week’s meeting. A smaller rate hike would provide additional support for the US dollar. Despite this, the euro is facing major support levels ahead of 0.98 and traders should be on guard for a reaction rally in the EURUSD.