EURJPY has encountered some key resistance above the 144 level again and will look to economic data for the next direction.

Today's price was weighed by the latest minutes from the ECB Monetary Council meeting. 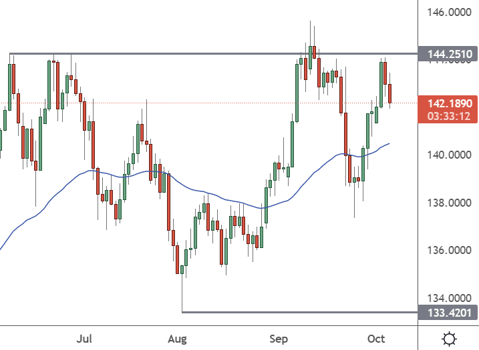 From the last meeting, ECB officials worried inflation could get stuck at higher levels, so aggressive policy tightening was needed, even if it drags down growth. The ECB raised rates by a larger-than-expected 75 basis points at the September meeting and warned of further hikes. The central bank feared rapid inflation was at risk of getting entrenched, making it harder to stop.

While some members called for a smaller, 50 basis point hike, a "very large" number of policymakers backed a more significant increase.

"Inflation was far too high and likely to stay above the Governing Council's target for an extended period," the ECB said in its account. "The expected weakening in economic activity would not be sufficient to reduce inflation to a significant extent and would not in itself bring projected inflation back to target," it added.

Since that meeting, inflation has quickened to 10%, a level not seen in some eurozone countries for over 70 years. The ECB will meet on October 27, and there is a likelihood that the eurozone economy is already in a recession.

There is no significant economic data release for the euro or the yen next week, and investors will continue to look at the prospects for further ECB interest rate hikes. The backdrop of Ukraine will also play a part with talk of a price cap on gas prices from the European Commission.

The Bank of Japan was cautiously optimistic about the economy on Thursday and hoped that next week's re-opening of borders can boost inbound tourism and the economy via the weak yen. However, in a quarterly report for regional economies, the central bank warned that manufacturers were experiencing weaker demand. That will hurt the outlook for exports due to slower global growth.

The outlook for the eurozone is showing signs of a global growth slowdown, and traders will try to focus on the big picture. For the moment, there are precise levels to target for the EURJPY.