EURGBP is facing a strong cluster of support levels ahead of the 0.8550 level. 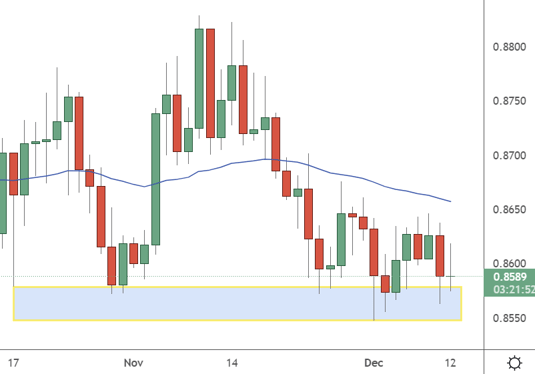 On the daily chart, the pair trades at 0.8590, and the coming days will be key for a breakout or a sharp reversal.

Britain’s economy returned to growth in October, with activity bouncing back from the impact of another bank holiday for the Queen’s funeral. Despite that, a long recession is still expected.

The Office for National Statistics said gross domestic product (GDP) for the month rose by 0.5% after a decline of 0.6% in September, which was driven by business closures for the national mourning. Car sales added a boost with a wider recovery in the country’s dominant service sector, while there was strong growth in activity in the health sector.

The Bank of England said that the country’s economy was probably already in a recession that could last until the end of 2023 after GDP fell by 0.2% in the three months to September. Despite a recovery in October, contractions in November and December could signal a second consecutive quarter of decline—the technical definition of a recession.

Economists said the latest figures did not change the overall picture of a slowing economy. David Brier, the head of research at the British Chambers of Commerce, said: "Business confidence has been falling dramatically as firms face a wall of higher prices and energy bills, increased taxation, and rising borrowing costs."

On employment, analysts are expecting a better showing than last month’s loss of 52k jobs at -17k. The day will also see a final reading of German inflation, with a reading of 10% forecast. ZEW economic sentiment has been released for the German and Eurozone economies, with both set to improve.