AUDNZD Arrives at a Low With Employment and GDP Data

AUDNZD has shown signs of a base in the last week and could confirm the low with New Zealand GDP and Australian employment data.

The yearly GDP rate for the Kiwi economy is expected to jump to 5.5% from 0.4% in the third quarter. A miss on that number could add steam to the Aussie rally. 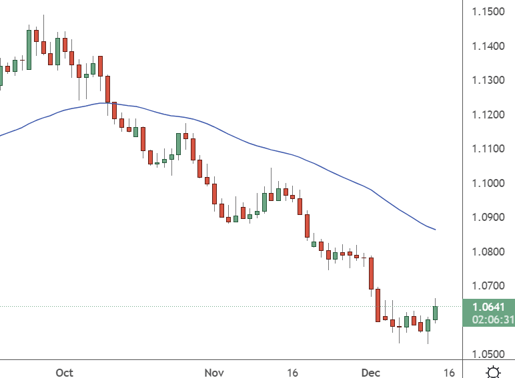 Australian employment data is also released, which is always an important indicator for the country's Reserve Bank.

The economy is expected to add 19k new jobs, which would be lower than last month's 32k. If this is confirmed, the RBA will likely slow its rate hike path, which would also boost the Aussie.

New Zealand's government said on Wednesday that the country would enter a recession in 2023, even with the budget on target to move into a surplus for the 2024–25 financial year. Spending constraints and the expected recession will add to the challenges facing Prime Minister Jacinda Ardern's Labour Party as it approaches next year's general election.

According to Wednesday's economic update from the Treasury, the economy has been forecast to shrink in the second, third, and fourth quarters of 2023.

The Reserve Bank of New Zealand appears more pessimistic than the Treasury, with a projected year-long recession that begins in the second quarter of next year. This is primarily due to steep interest rate hikes used to slow inflation.

"2023 is a challenging year for many New Zealand households," Finance Minister Grant Robertson said at the press conference. "Getting the budget back to surplus would demand tough budgetary choices," he said in a statement.

For the Australian jobs data, a recent survey said that thousands of Australians have been locked out of the job market and trapped in unemployment for years as entry-level jobs disappear.

The Anglicare Australia survey found 15 applications for every entry-level job. This could keep a lid on the Australian employment market, and the RBA will likely slam the brakes on interest rate hikes in the coming months.