The AUDJPY has data released this week, but traders should consider BOJ intervention plays.

The Japanese central bank has intervened in the USDJPY, but to no avail, and may come back again. 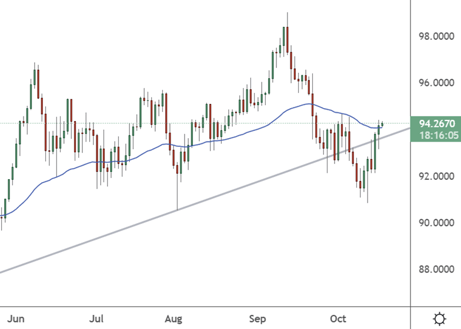 The AUDJPY has continued a recent rally and trades at 94.25, a move above the previous uptrend. That would need to hold for further Aussie dollar strength.

The Bank of Japan warned markets of the weakening Yen, but intervention attempts have not worked. We must consider whether they will return with a blockbuster move against the USD.

Tomorrow sees the release of Australian employment, and a 25k jobs gain is expected after last month’s 33.5k. The unemployment rate is likely to stay at its decades-low 3.5%.

The following day will see Japanese inflation, and a reading of 3% was seen last month, a far cry from the 0.1% seen almost a year ago. The BOJ has been pushing back any calls to tighten its ultra-accommodative stimulus. Still, inflation could force their hand if it continues higher.

In the meantime, JPY shorts should tread carefully if the BOJ wants to send a louder message to financial markets over the yen price. BOJ Governor Kuroda said it was “Extremely Important for FX to Move Stably Reflecting Economic Fundamentals.”

The weakening of the yen was “sharp and sided” and “not desirable for the economy.”