One of the stock highlights of the year to date has been the Nio share price rise, something which can be appreciated by looking at the daily chart. The rise for the Chinese electric car maker of 1,000%, has not only been exceptional in terms of its magnitude, but the way it has been sustained. While rival EV maker Tesla (TSLA) has seen massive volatility, for Nio, so far, it has been a relatively smooth ride.

Learn more about shares trading with us

Of course, the 10 fold rise has been driven by what are now familiar fundamental drivers. The key one is the way that in the wake of the COVID-19 pandemic investors have become far more environmentally conscious, especially given that coronavirus is essentially a respiratory disease.

This concern has placed renewable energy front and centre as a space of interest, with EV’s leading the way on a day to day basis. The second key backing factor for the Nio share price is clearly the origin of the company in the massive Chinese market.

China has seen an economic resurgence since the pandemic, and the ongoing rise of the middle class market in China. A company addressing the high end car market is likely to be seen as a winner. So far this has proved to be the case.

With a market capitalisation greater than that of many of the fossil fuel players such as GM (GM), the rise and rise of Nio shares has been nothing less than phenomenal. But at the same time it has been perfectly understandable, not the usual situation for very popular rising shares.

Nio, which has been described as Tesla’s nemesis, does appear to justify such a tag. This is not only because of its position in the largest market in the world - China, but also the way that its product line includes a SUV and will be expanding rapidly over the next year.

Perhaps most crucially, in terms of the race of Nio shares with Tesla, the Chinese group has secured its financial position. This is quite a turnaround from the position Nio was in just a year ago, running out of cash, and with poor sales.

A year on and boosted by $1bn in local Chinese funding, Nio can progress with battery innovation, and after sales services which threaten to place it well ahead of Tesla in the market place.

How to trade NIO shares

Open a live or demo account with ATFX to get started today. Trade shares on leverage, take up a long or short position when trading with CFDs and make potential gains from price movements.

2. Open MT4 either on your desktop or mobile

3. Search for NIO shares in the market watch or symbols window

5. Hit buy or sell, and then confirm the trade

What is clear over the past year, and especially since the pandemic began, is the way that investors are trying to bet on who will be the winner in the EV space? The key issue in this battle is who will be able to beat the opposition. In the end it may come down to the rollout of EV infrastructure such as charging points, as to the cars themselves. In this respect it could be that it is not so much Nio’s cars that will win the race, but customer service, Government subsidies, as well as leasing and financing deals. Set against this background the trend for Nio seems well entrenched for now. 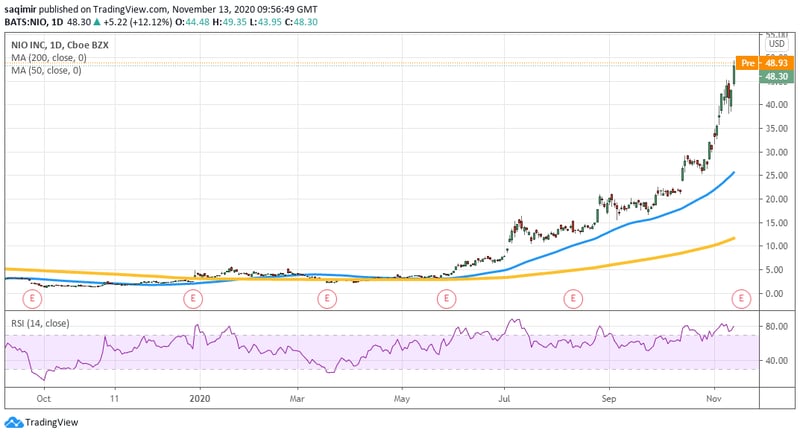 To see all upcoming news and data releases that’ll have an effect on the financial markets, check out our Economic Calendar. It’ll cover all major releases from global economies and give you the exact time the release is due, the previous data, forecast data and actual data (once released).